On a high after beating South Africa and New Zealand, Pakistan would be looking to continue their winning run and keep their semi-final hopes alive when they face Afghanistan. The latter, on the other hand, would be seeking to play spoilsport by trying to cause an upset.

After looking completely down and out following their pathetic loss to India, Pakistan have staged a terrific comeback, first knocking out Sri Lanka and then handing New Zealand their first defeat. The uncanny similarities with Pakistan's 1992 campaign has gone viral, and might well be serving as a source of inspiration for them.

Change in personnel has made a significant difference for Pakistan as has been the sublime form of Babar Azam. In the last game, he completely shut out any chances New 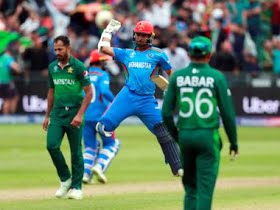 Zealand had of fighting back by slamming a brilliant hundred. Haris Sohail replacing the out-of-form Shoaib Malik has gone a long way in changing Pakistan's fortunes. Plus, the inclusion of Shaheen Afridi has given the bowling led by Mohammad Amir the much-needed edge.

Pakistan have been aided by the fact that England have somewhat lost their way in the last two matches. They should be confident of beating Afghanistan although the latter came closest to beating India, of all the sides. Next, they face Bangladesh, which could be a make or break clash.

Even though Afghanistan were not expected to win any matches against the big teams, they would be still disappointed with the results as they haven't lived up to their reputation of fighters. The match against India was more like what was expected of them. Hopefully, it would inspire the key players like Rashid Khan, Mohammad Nabi and skipper Gulbadin Naib to do even better.