India won the second Test of the three-match series against Sri Lanka at the P Sara Oval by 278 runs, thus levelling the series, and denying Kumar Sangakkara a winning farewell.

India won the second Test of the three-match series against Sri Lanka at the P Sara Oval by 278 runs, thus levelling the series, and denying Kumar Sangakkara a winning farewell. Here's a look at five factors that made the major difference as far as India were concerned.

Lokesh Rahul and Virat Kohli's partnership: India were off to a disastrous start on the opening day. Murali Vijay was out in the very first over of the day, and Ajinkya Rahane's promotion to number three did not work. This is when Lokesh Rahul and skipper Virat Kohli came together, and rebuilt the innings. They began cautiously but, as the partnership progressed, they began to flourish. Both Rahul and Kohli displayed very good technique against both the pacers and spinners. Although the Indian skipper would have been disappointed that he did not carry on to complete a hundred, Rahul ensured he carried on, and reached three figures for the second time in his career. 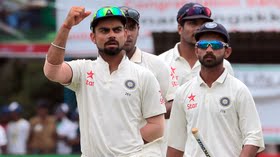 Rohit Sharma's lower order blitz: The exercise of sending Rohit one down was clearly an exercise in futility. He neither has the technique nor the temperament to succeed at that crucial number. But, lower down the order, he proved that he can still be useful. Rohit's 79 was crucial in the sense that it enabled India to get closer to a competitive total. Following the Kohli-Rahul partnership, India seemed to have lost their way. But, Rohit saw to it that India retained the advantage. He was positive against the spinners, even taking on Rangana Herath. In the second innings as well, he played a crucial cameo as India looked to set up a big chase for Lanka.

Ashwin-Mishra combo: Clearly one of the biggest defining factors of the match. Ravichandran Ashwin and Amit Mishra bowled very well in the first Test too, but faltered in the face of Dinesh Chandimal's counter-attack. This time, they were on top of their game from start to end. Ashwin bowled with guile, and troubled the Sri Lankan batsmen constantly. The offie got Sangakkara out in both innings of this Test as well. He beat the legend with his variations. In the second innings, he was unplayable. Mishra also provided excellent support to Ashwin. He cleaned up the tail in both the innings, but the delivery to dismiss Chandimal, round his legs was traditional leggie stuff.

Murali Vijay's fighting fifty: The Indian opener had fallen for a duck in the first innings, but made amends in the second. India had lost Rahul early this time, but Vijay held the innings together. He displayed the technique needed to do well at the surface, and played a key hand in India setting up a match-winning total. Though they were aided by the first-innings lead, Vijay ensured the advantage remained with India even as he struggled with the recurrence of the hamstring.

Ajinkya Rahane's match-winning hundred: His was the knock that made the big difference as far as setting a target was concerned. He shared an important partnership with Vijay, but even after the latter was dismissed, Rahane carried on. His fantastic hundred made sure India set Sri Lanka a target of over 400. And, the rate at which it was scored ensured the Indian bowlers had enough time to bowl out Lanka for a second time. He was again key in the field, making his presence felt as a safe hand.