In a heart-warming gesture, New Zealand’s U-19 cricketers lifted an injured West Indian batsman and took him off the field after his dismissal.

In a heart-warming gesture, New Zealand’s U-19 cricketers lifted an injured West Indian batsman and took him off the field after his dismissal. The incident occurred during the quarter-final match played between New Zealand and West Indies during the ICC U19 World at Willowmoore Park on Wednesday.

West Indies’ middle-order batsman Kirk McKenzie suffered severe cramps in his leg and had to retire hurt when on 99. He came back towards the end of the innings after West Indies lost their ninth wicket. But, McKenzie has dismissed the first ball he faced, and thus was stranded on 99.

However, as he was walking back to the pavilion, McKenzie’s cramps resurfaced. As he looked in a lot of pain, many New Zealand players came forward to enquire if he was okay. Then, in a tremendous gesture, Kiwi skipper Jesse Tashkoff and pace bowler Joey Field carried McKenzie off the field by lifting him in their arms. 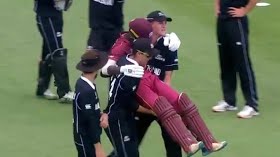 The wonderful gesture of sportsmanship found wide appreciation from current and former cricketers. Rohit Sharma, the hero of India’s Hamilton triumph, wrote on Twitter, “So good to see this #SpiritOfCricket at its best.” India legend Sachin Tendulkar tweeted, “The Spirit of Cricket is a value that has always been very important to me personally. This lovely gesture by the U19 New Zealand team just warmed my heart.”

Former India batsman Mohammad Kaif was also highly touched by New Zealand’s gesture. “Mastery begins with humility. The legacy being so beautifully carried forward by the next generation of New Zealand stars. There is a reason why they are the most loved team of our times,” Kaif explained while Kiwi all-rounder Jimmy Neesham wrote in appreciation, “Fantastic work lads! Great to see.” Another retired Indian legend VVS Laxman added, “So beautiful to see this from New Zealand.”

It may be recalled that following the 2015 World Cup semi-final against South Africa at Eden Park in Auckland, New Zealand’s Grant Elliot gave a helping hand to Dale Steyn after hitting him for the six that pierced Proteas’ hearts and lifted the Kiwis into the final.

Speaking about the U19 World Cup quarter-final between New Zealand and West Indies, the Kiwis stunned the Windies in the chase despite being 153 for 8 at one stage chasing 239. Joey Field (38 not out) and Kristian Clarke (46 not out) featured in a brilliant partnership to take New Zealand to the semis, winning the game with two balls to spare. Earlier, Clarke also claimed 4 for 25 with the ball.