Mumbai Indians started off its Champions League campaign with a defeat against the local South African team – Lions led by former international Neil McKenzie. The Lions pulled off a superb 8-wicket win with 7 balls to spare in the Group B Match at the New Wanderers Stadium in Johannesburg on Sunday evening.

Asked to bat first after losing the toss, Mumbai Indians had to face some chin music on a pacy and bouncy pitch. Veteran Sachin Tendulkar was tied down completely at one end. Mumbai despite that got the runs going thanks to a number of extras conceded by the quick bowlers. Opener Dwayne Smith scored a promising 26 (from 19 balls with 6 fours) before getting plumb infront to a full ball from Chris Morris in the 5th over. Tendulkar perished after a disastrous knock of 16 from 24 balls (with 2 fours) getting cleaned up by left-arm spinner Aaron Phangiso in an attempted slog sweep. 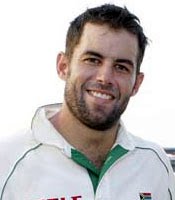 Mumbai Indians finished with a modest total of 157 for 6. Mitchell Johnson, who was surprisingly promoted at no.4 consumed 29 balls for his 30. Rohit Sharma scored a run-a-ball 27 while Dinesh Karthik played an important cameo of 19* (from 9 balls). For the Lions, left-armer Dirk Nannes was simply outstanding as his red hot pace accounted for just 15 runs in 4 overs besides the wicket of Rohit Sharma. Spinner Phangiso was brilliant as well with figures of 4-0-17-1.

The Lions in their run chase were tied down at 37 for 2 in 6.5 overs before the 19-year-old Quinton de Kock was joined by his Skipper Neil McKenzie. The left-right combination for Lions sealed the match through an unbroken stand of 121 for the 3rd wicket. De Kock scored 51* (from 33 balls with 5 fours and 2 sixes) while Neil McKenzie picked up the Man of the Match award for his 68* (from 41 balls with a dozen fours). For the Mumbai Indians, Lasith Malinga bowled well for his 3.5-1-18-1 but the other bowlers including Skipper Harbhajan Singh (4-0-36-1) failed to complement him.