On a run-filled day, Steven Smith and Adam Voges hit hundreds as Australia finished Day four of the Perth Test at 258 for 2, taking a lead of 193 runs

On a run-filled day, Steven Smith and Adam Voges hit hundreds as Australia finished Day four of the Perth Test at 258 for 2, taking a lead of 193 runs. This was after Ross Taylor took his overnight score from 235 to become the last man out in New Zealand’s first-inning for 290. Taylor’s brilliance ensured New Zealand crossed the 600-run mark, and took a lead of 65 runs in the first innings, which seemed improbable at the end of the first day’s play. With only one day to go, a draw seems the most likely result, unless Smith makes a sporting declaration and sets up a result possibility.

Taylor carried on from where he left off on day three. His 290 was scored at an impressive strike rate of 77.54. As per Test stats, only three other players have recorded scores in excess of 250 at a better strike rate – David Warner, Virender Sehwag and Matthew Hayden. In a knock that was a tribute to his fitness, Taylor batted for 567 minutes and hit 43 fours in his knock before he holed out deep midwicket for 90, playing a tired shot. It was a knock that the crowd at the WACA would remember in years to come. 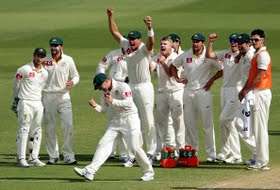 While Taylor broke a few records at Perth, he also missed out on a few. When he took a single off Nathan Lyon to move to 288, he crossed the highest individual score by a visiting batsman in Australia, held by Tip Foster’s 287 since 1903. However, he just fell short of the highest Test score by a New Zealander, 302 by Brendon McCullum. He ended up finishing at number three in the list, behind former Kiwi skipper Martin Crowe, who made 299 against Sri Lanka in Wellington.

Having gained a crucial lead, New Zealand’s bowlers, for the first time, made early inroads into Australia’s batting. Tim Southee bowled an outswinger to have Joe Burns caught at slip for a duck, and David Warner fell well short of a hundred for the first time in the series. The left hander drove Trent Boult, and was caught in the covers for 24. Smith and Voges, however, batted on and on. They added an unbeaten 212 for the third wicket by stumps – Smith was unbeaten on 131 and Voges on 101, in what was yet another big partnership in the Test.

Smith, who batted at number three, owing to Usman Khawaja’s unavailability, looked in good touch from the start. He drove the ball with ease, hitting 18 fours in all. He was dropped down the leg side by BJ Watling on 96 and soon brought up his ton with a cover drive off Boult. At the other end, Voges, playing at his home ground, gave his good support. He looked a bit edgy in the 90s, before reaching his second Test hundred in the penultimate over of the day, pulling Kane Williamson through midwicket for four. Smith was hit on the helmet and on the elbow late in the day, but batted on. His possible declaration could well decide the fate of the match.