After twelve attempts at reaching the final previously in vain, the Delhi Capitals finally managed to break the jinx as they beat the Sunrisers Hyderabad by 17 runs in the qualifier-2. The batsmen had done their job by putting up 189 runs on the board, and Rabada-Stoinis picked up seven wickets between them even as Williamson nearly pulled off a major heist.

Shreyas Iyer won the toss and chose to bat in this virtual semi-final. Stoinis was surprisingly sent ahead of Rahane to open alongside Dhawan, with Prithvi Shaw being dropped. That decision proved to be a masterstroke in hindsight, as Delhi finally got an opening stand of substance. Stoinis was dropped by Holder in the third over, to which the batsman responded by scoring 27 runs in his next 9 balls. Dhawan too was hitting it sweetly from the other end with his slog sweeps against Nadeem finding the fence. DC raced to 65-0 at the end of the powerplay

In desperate need of a wicket, Warner turned to Rashid, and the star Afghan spinner replied with the big wicket of Stoinis. Iyer joined Dhawan at the crease, and the pair made sure that they didn’t gift any more wickets to Rashid by playing him cautiously. That meant a drop in the run rate, and Iyer was wary of that. He tried to go for the big hit but lost his wicket in the process to Holder. Dhawan however, was rollicking along well and also got to his fifty. 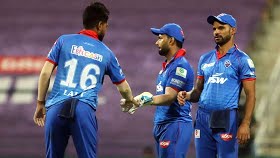 At 139-2 with five overs remaining, Hetmyer was sent to do some damage with the bat and he did just that. He smashed four fours and a six in his knock of 42*(22). Dhawan tried to play an uncharacteristic reverse sweep against Sandeep, but was adjudged LBW for a fine innings of 78(50). Natarajan nailed six yorkers in the final over, as Delhi finished at 189-3 at the end of the innings, 10-15 runs short of what they would have anticipated at the halfway stage.

Chasing a stiff target, Priyam Garg came alongside Warner, and made his intentions clear with a six against Ashwin off just his second ball. Warner was bowled brilliantly by an inswinging yorker from Rabada and much of SRH’s hopes dashed away right then. Pandey was looking dangerous and combined with Garg to hit some boundaries, as the score reached 36-1 at the end of four overs. Stoinis then bowled the massive fifth over as he dismissed both the batsmen.

Previous match heroes Williamson and Holder were at the crease now, but the equation today was far more difficult than before. The required rate went above 10, but both the batsmen resisted big hits with three wickets already down. DC spinners were about to put the stranglehold on SRH middle order, but Williamson was just able to find a boundary here and there. Struggling Holder was caught at deep midwicket against the bowling of Axar Patel.

Not many would have backed SRH from that point on, but a dangerous partnership of 57 runs between Samad and Williamson gave a mini heart attack to the Delhi fans. Young Samad smashed Nortje for 2 fours and a six in three balls in his knock of 33(16). Williamson, who got to his second successive fifty, was finding the gaps to perfection as the improbable chase was seemingly becoming possible. But the man with the golden arm Stoinis picked up the huge wicket of the Kiwi skipper in the 17th over. Rashid and Samad still were trying hard, but Rabada picked up three wickets in the penultimate over to all but seal the game for his team. Nortje gave only four runs in the final over as Delhi defeated Hyderabad by 17 runs. Scorecard