I am obviously happy, but I would have liked more: Hungry Mayank Agarwal

It has been a awhile since Mayank Agarwal has been waiting for his Test debut. But, when it finally came on Boxing Day at Melbourne

It has been a awhile since Mayank Agarwal has been waiting for his Test debut. But, when it finally came on Boxing Day at Melbourne, it was worth the wait. With the regular openers struggling, Agarwal made his mark with a sedate 76, registering the highest score by an Indian debutant on Aussie soil.

"It was a tremendous feeling to get the India Test cap. I had a lot of emotions when I got the cap. I will cherish it for the rest of my life. The first thought was 295," Agarwal was quoted as saying in a PTI report.

Agarwal admitted that things weren’t easy for him out in the middle and that he had to keep his emotions in check. 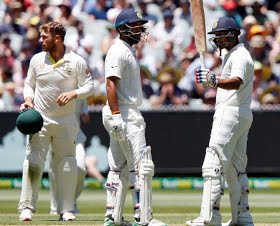 "I just stuck to my plans and just kept telling myself, "there is a plan that I have to go through and I am just going to stick to that". Even though it was overwhelming, it was good and I am happy with the way I started," Agarwal went on to add.

Apart from registering the highest Indian score for a Indian debutant in Australia, Agarwal also became only the seventh Indian opener to score a half-century on Test debut.

"I am happy but obviously I would have liked more. I would definitely take 76 rather than take something less than that. That said I would have liked to go on, and score more runs and stay not out at the end of the day," Agarwal stated further in the PTI report.