The only way New Zealand can beat West Indies!

This has easily been a tour New Zealand would like to forget as soon as possible – yes, we are saying this even before the matches are over, for such has been the dominance of West Indies right from the beginning of the first T20 game.

This has easily been a tour New Zealand would like to forget as soon as possible – yes, we are saying this even before the matches are over, for such has been the dominance of West Indies right from the beginning of the first T20 game. New Zealand have not been helped by injuries as well, with their key batsman and captain Ross Taylor being ruled out. Nothing looks rosy for the Kiwis. However, theoretically they are still in with a chance if they manage to do the following… 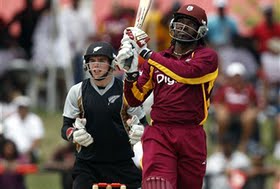 Given the current form that Chris Gayle is in, this seems next to impossible at the moment. Having said that, the left-hander has scored 50 plus in each of the last four clashes against the Kiwis, which means that he is due for a failure soon. Of course, the law of averages doesn’t always work out in cricket, and so the New Zealanders cannot just hope that Gayle has a bad day and gets out early. Their bowlers have to try and spot a weakness in the explosive left-hander’s game, and exploit it. The dangerous part is that Gayle is hungry for runs, and if he gets off to another start, there is no reason why he shouldn’t go on to another big score.

While they would want to see the back of the in-form Marlon Samuels early, the bigger worry for the visitors would be the ominous performances of Windies’ big-hitters Kieron Pollard and Dwayne Bravo. Pollard has been brilliant towards the latter part of the innings, and the Kiwis have had no answer to his dominance. Unless and until the New Zealanders can find a way to get through him, they will struggle to restrict the Windies batting even if they manage to get a few wickets early. Bravo is another man New Zealand will have to try and restrict. Even a couple of overs with Bravo at the crease can change the complexion of a match. This is why his batting effort will be significant.

Put up a better batting effort

Just like their bowling, New Zealand’s batting has also been under the pump. They are missing the services of Taylor for sure. Still, there were signs of positivity during the second game at Sabina Park, Jamaica for sure. Martin Guptill and stand-in-skipper Kane Williamson came up with fighting half-centuries while Bradley-John Watling played a superb counter-attacking knock. His unbeaten 72 gave New Zealand’s score a sense of respectability in the end. If only the likes of Rob Nicol, Daniel Flynn and Tom Latham can come up with better efforts in the do-or-die clash, Kiwis could still compete. The experienced all-rounders like Jacob Oram, Kyle Mills as well as Nathan McCullum must come to the party.

It will be a tough task for sure, but not an impossible one if they can get their act together.