Chetan Sharma is remembered for two primary reasons – being the first Indian to pick up a hat-trick in one-day internationals, and also for, infamously, being hit by Javed Miandad for a last-ball six at Sharjah.

Chetan Sharma is remembered for two primary reasons – being the first Indian to pick up a hat-trick in one-day internationals, and also for, infamously, being hit by Javed Miandad for a last-ball six at Sharjah. He had this other moments of glory as well though. Edgbaston in July 1986 was one such. This was the third and final Test of the series which India had already won by clinching the first two matches. Sharma took the opportunity to make a serious impression, picking up a ten-for in the game that went on to end in the draw. 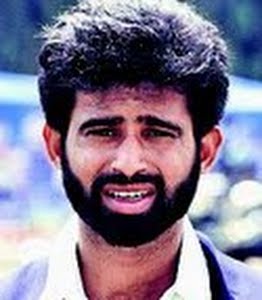 It was the home side that won the toss and chose to bat first. Kapil Dev got India off to a great start, dismissing Graham Gooch and Bill Athey for ducks before Maninder Singh cleaned up Mark Benson for 21. Chetan Sharma then joined the action, picking up the major scalp of David Gower, just when he looked set for a big score. The England middle and lower-middle order batted exceedingly well and seemed headed for a 450 plus score. Sharma however ensured that England did not get that far, claiming the last three wickets in a hurry. Sharma bowled Phil Edmonds and Bruce French before having Neal Radford caught by Sunil Gavaskar as England were all out for 390. Sharma finished with figures of 4 for 130 from 29.3.

In an amazing coincidence, India got exactly the same score in their first innings thanks to good contributions from most of their batsmen. Sharma then came up with an even better spell in the second innings. After England got off to a decent start, Sharma began his wicket-keeping spree by trapping Gooch lbw with the team score reading 49. Ravi Shastri then sent back Benson and Sharma followed by dismissing Gower, Athey and Gatting, all of whom had got off to starts. He then returned to clean up the tail, claiming the last two wickets. Sharma finished with magnificent figures of 6 for 58 as England were cleaned up for 235.

Other impressive performances in the Test

Gatting remained unbeaten in England’s first innings compiling a painstaking 183, having batted for 383 minutes. In reply, India’s first innings was built around consistent contributions all round. Mohinder Amarnath made 79, Mohammad Azharuddin 64, Kiran More contributed 48 and Roger Binny eked out 40.Sunil Gavaskar came up with a half-century in India’s second innings while Phil Edmonds picked up four wickets as the match headed towards a draw.

Sharma possessed a pretty convincing record against England. In five Tests, he scalped 20 wickets at an impressive average of exactly 25. The performance included two five-wicket hauls with a best of 6 for 58, which was also his best figures overall in Test matches. Sixteen of his 20 wickets against England came in England, a clear indication of how much he enjoyed the seamer-friendly conditions.