An absolute blinder of an innings from Kieron Pollard helped hosts Mumbai Indians to overcome the dangerous Sunrisers at the Wankhede Stadium.

An absolute blinder of an innings from Kieron Pollard helped hosts Mumbai Indians to overcome the dangerous Sunrisers at the Wankhede Stadium. Needing 179 to win, Mumbai were struggling to find any momentum before Pollard arrived and assaulted the Sunrisers bowlers to win the match out of nowhere for the hosts! Pollard smashed 66* from just 27 balls with 2 fours and as many as 8 sixes to guide Mumbai Indians to a 7-wicket win with three balls to spare.

The match started with Sunrisers off to a flier with Parthiv Patel taking 19 runs from Mitchell Johnson in the opening over. Parthiv played a sweet cameo of 26 from 14 balls to provide initial energy for the visitors. Shikhar Dhawan, his opening partner showed great form to score 59 from 41 balls with 6 fours and 2 sixes to consolidate Sunrisers.

The visitors from 111 for 2 in 12.5 overs lost some momentum in the middle overs but closed their innings in a decent fashion at 178 for 3. Skipper Cameron White remained unbeaten with 43* from 23 balls with 3 fours and 3 sixes. For Mumbai, Lasith Malinga did a great job taking 2 for 26 in his 4 overs. 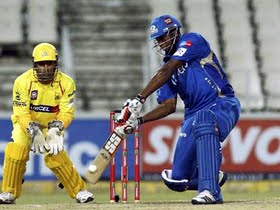 Mumbai Indians in their run chase were too slow with Sachin Tendulkar consuming too many balls. The Little Master started to get going finally but retired hurt with cramps after scoring a 31-ball 38. After Tendulkar’s exit, Mumbai Indians lost a couple of wickets in succession to feel the heat at 99 for 3 in 13.2 overs. The rest of the game saw Pollard clobbering the Sunrisers’ bowlers in the company of Skipper Rohit Sharma who scored two sixes in his 20* from 15 balls. Thisara Perera got lots of stick from Pollard to end up with disastrous figures of 3.3-0-55-0! The only bowler who could keep Pollard quiet was Steyn who gave away only 23 off his 4 overs but failed to get any wickets.

Toss and Teams: Sunrisers led by Cameron White have won the toss and elected to bat against hosts Mumbai Indians at the Wankhede Stadium. Pollard returns back to the Mumbai team in the place of Maxwell while Dhawal Kulkarni replaces Abu Nechim.