Time for some real action as Super Eights begin

And now time has come to watch some real hardcore cricket in Sri Lanka with the Super Eights kicking off this Thursday at Pallekele. In the dozen matches prior to this, we have witnessed quite a few one-sided affairs.

And now time has come to watch some real hardcore cricket in Sri Lanka with the Super Eights kicking off this Thursday at Pallekele. In the dozen matches prior to this, we have witnessed quite a few one-sided affairs. Add to that a couple of big contests were curtailed by rain. The World T20 this time around is yet to captivate the hearts of the cricket fans. Hopefully with the Super Eights, the tournament should be a lot more interesting than what it was till today.

All the matches in the Super Eights are promising to be tight contests after filtering out the four weak teams. In the next six days, there is plenty of action ahead of us with as many as 12 matches to be played. Each day will see a double header leaving no side the breathing space which was available in plenty during the group stage. By the 2nd of October, the Super Eights will be done and dusted! 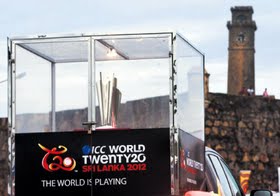 The Super Eights which will begin on Thursday will see Pallekele host: Sri Lanka Vs New Zealand followed up by England Vs West Indies. On Friday, there are two explosive games with Pakistan taking on South Africa and Australia clashing against India. Both these games will see Spin Vs Pace. This double header is going to be played at the R Premadasa Stadium in Colombo.

During the weekend, on Saturday, we have England Vs New Zealand followed up by Sri Lanka Vs West Indies at Pallekele. Sunday is going to be the Big Day of the tournament as arch rivals India and Pakistan engage into a battle. Their warm-up match saw worldwide interest despite the match being an unofficial one. Before this match, Australia and South Africa clash with each other in the afternoon. This double header on Sunday is to be played at Colombo.

And then the new week starts with New Zealand taking on West Indies and Sri Lanka hosting England both at Pallekele next Monday. The last two games of the Super Eights will be on Tuesday at Colombo with Australia taking on Pakistan and India meeting South Africa.

The eight teams are divided into two groups. And each of the team plays three matches in the Super Eights. Obviously the top two teams of each group make it to the Semi Finals.