Stats: These batsmen scored a hundred in their 100th Test

On Thursday, South African legend Hashim Amla became only the eighth batsman to score a hundred in his 100th Test

On Thursday, South African legend Hashim Amla became only the eighth batsman to score a hundred in his 100th Test. He made 134 from 265 balls with the help of 16 fours. The innings, in the company of JP Duminy’s 155 put South Africa in a position of strength as they posted 426 in their first innings. Thanks to Amla’s hundred, the Proteas look on track for a clean sweep. Here’s a look at the other seven batsmen who have achieved the feat before him.

Colin Cowdrey: He was the first ever international batsman to score a hundred in his 100th Test. Batting at number three in the first innings of the Test, Cowdrey, who was captain of the match, made 104 against Australia at Edgbaston in July 1968. He faced 247 balls and hit 15 fours before being dismissed by Eric Freeman, clean bowled. Thanks to Cowdrey’s ton, 96 from Tom Graveney and 88 from opener John Edrich, England posted 400 plus on the board. The match ended in a draw as England batted for 42 overs in their second innings. 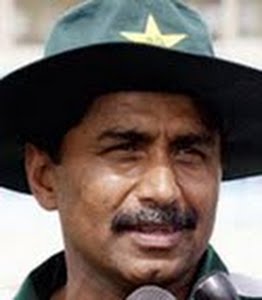 Javed Miandad: The Pakistani legend made 145 against his favourite opponents India during the third Test of the series at Lahore in December 1989. His knock came from 289 balls with 10 fours. This was the same game in which Sanjay Manjrekar made 218 as match was drawn.

Gordon Greenidge: The former West Indian opener hit 149 against England at Antigua in April 1990. Greenidge made the hundred after the Englishmen were held to 260 batting first. In response, the Windies hit 446. Greenidge’s innings came from 207 balls with 18 fours and three sixes. The Windies won by an innings and 32 runs.

Alec Stewart: The English batsman returned the favour when he made hundred against the Windies at Manchester in August 2000. His 105 came from 153 balls with 13 fours. Brian Lara hit a second-innings hundred as West Indies saved the Test.

Inzamam-ul-Haq: Pakistan’s former skipper holds the record for the highest score by any player in his 100th Test. Inzamam hit 184 from 264 balls with 25 fours before being trapped lbw by L. Balaji, against India at Bangalore in March 2005. This was the same match in which Younis Khan made 267 and Virender Sehwag 201. But, Pakistan went on to win by 168 runs.

Ricky Ponting: Another former captain, he is the only player to score a hundred in each innings of his 100th Test. He smashed 120 and unbeaten 143 from 159 balls as Australia chased down 287 in 60.3 overs. The knocks came against South Africa at Sydney in January 2006.

Graeme Smith: Before Amla, he was the one to have scored a hundred in his 100th Test, against England at The Oval in July 2012. He made 131 from 273 balls with 20 fours. His knock was overshadowed by Amla’s historic, unbeaten 311. South Africa posted a massive 637 for 2 as the Proteas went on to win by an innings and 12 runs.