Langer: Paine toughest pretty boy I have ever met

Australia coach Justin Langer has stated that skipper Tim Paine will be fit for the second Test against India at Perth despite the finger injury he sustained at Adelaide while batting.

Paine battled hard but couldn’t prevent India from going 1-0 up in the four-match series. "Painey is the toughest pretty boy I've ever met in my life. Even if it was snapped in about four places he'd still be right. He's absolutely fine. He's obviously had issues with it before but he is 100 per cent ready to go,” Langer was quoted as saying in an India Today report.

Paine was hit on the finger in which he has had seven surgeries over seven years. 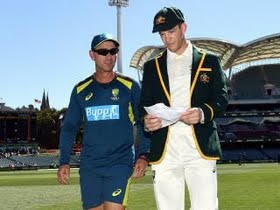 Meanwhile, Langer believed that the pitch at Perth at the new stadium will be pacy and bouncy. "I'm really fascinated and can't wait to see what the Optus wicket brings. I went and watched a bit of the game, NSW versus WA. Certainly some pace and bounce. We've seen some pace and bounce in it during the one-dayers and T20 game," Langer added.

It may be noted that the two teams will not be playing at the traditional WACA, which is widely believed to be among the quickest track in the world for fast bowlers.