Enter Blog Content here.Looking to somehow stay alive in the World Cup, Sri Lanka will take on West Indies in match number 39 of the tournament at Chester-le-Street on Monday

Enter Blog Content here.Looking to somehow stay alive in the World Cup, Sri Lanka will take on West Indies in match number 39 of the tournament at Chester-le-Street on Monday. While the win against England gave the Lankans hope, their chances suffered a major setback after South Africa subjected them to a massive nine-wicket defeat.

The Lankans put up a highly impressive show against England against all odds. However, with just six points from seven matches, they must now win both their remaining matches to have any chances of qualifying. Even if that happens, they will have to depend on the results of England and Pakistan's matches. So the team's fate is no longer in their own hands. But, from their end, they must try to stay alive.

Batting has been Sri Lanka's biggest letdown in this World Cup. Skipper Dimuth Karunaratne might have been dismissed first ball in the previous match but he has been the lone consistent factor for the Lankans with the willow. Angelo Mathews stood up in the match against England. However, he has been a big disappointment otherwise. The rest of the batting consisting of Kusal Perera, Kusal Mendis, Avishka Fernando, and the experienced big-hitter Thisara Perera really must stand up now if Lanka has to survive. 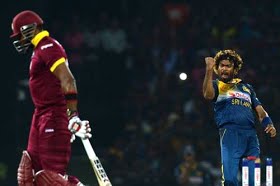 If Lanka has managed to make any kind of impression in the tournament so far, it has been because of their bowling. Lasith Malinga has stood out for the team in the games they have won. But, the pressure will be even greater on him now that Nuwan Pradeep, the other success story of the Lankan bowling, has been ruled out of the tournament due to chickenpox. The form of Dhananjaya de Silva is one of the few positives.

West Indies are out of the tournament and they would be highly disappointed with the results. They had the team to make it to the top four but just could not show the consistency. The World Cup began brilliantly for the Windies as they overpowered Pakistan by 10 wickets in their opening match. Since then though, things have only gone downhill for them. Chris Gayle has been a big let down for the team in his last World Cup.

Inconsistency in all departments is basically what has let the team down. Oshane Thomas began the tournament brilliantly but has slid with every game. Carlos Brathwaite and Shai Hope have shown glimpses of brilliance but it all hasn't come together for Jason Holder and his men. They would hope to at least finish off the tournament on a high, and further dent Sri Lanka's hopes.