Josh Hazlewood claimed 3/26 and took a diving catch of Jonny Bairstow to play the key role in Australia beating England by 19 runs in the first ODI at Old Trafford. Set to chase a reasonable 295, England slipped to 57 for 4, and fell short in spite of Sam Billings’ fighting maiden hundred.

Billings 118 and Bairstow (84) featured in a 103-run stand for the fifth wicket. However, they were always behind the scoring rate due to the early damage done by Hazlewood. And once Bairstow fell trying to accelerate the innings, Billings could only lower the margin of defeat. His valiant effort ended after he was dismissed off the last ball. 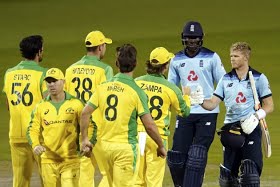 Australia went into the game without Steve Smith, who was hit on the head in the nets on Thursday. Smith passed a concussion test and will be monitored again prior to the second ODI. Batting first, they lost half their side for 123 before a sixth wicket stand of 126 between Glenn Maxwell (77 off 59 balls) and Mitch Marsh (73) brought them back. Maxwell smacked Jofra Archer for consecutive sixes in the 44th over before chopping on. Marsh was more sedate in his knock that took 100 balls.

In England’s chase, Jason Roy (3) and Joe Root (1) were sent back quickly by Hazlewood. Englishmen skipper Eoin Morgan (23) and Jos Buttler (1) then fell to Adam Zampa, who finished with 4 for 55. Bairstow fought hard, but eventually holed out. Billings kept finding the boundaries, but Moeen Ali’s cheap dismissal for six, also to Hazlewood, made things tougher.

Following the win, man of the match Hazlewood said, “There was a little bit there with the new ball and I made the most of it. I was lucky to get a couple of early ones and keep them under pressure.” Billings, on the other hand, had mixed feelings. “I’m obviously very pleased, but in a losing cause it’s mixed feelings. It is one of the hardest teams in world sport to get into at the moment. I’ve put too much pressure on myself in the past,” he admitted.