The accolade of winning the Cricketer of the Year is a massive achievement for Ashwin. After all, only two other Indians have won the Sir Garfield Sobers Trophy. And those two are none other than Sachin Tendulkar and Rahul Dravid. For Ashwin to join the elite list is a leap towards greatness for sure. And although his recent performances against England weren't taken into account, the offie would be pleased to have won the award against the backdrop of a successful series.

By winning the Cricketer of the Year, life, in a sense, has come full circle for Ashwin. It was against England at home in 2012 that his career took a massive dip. Even as Graeme Swann and Monty Panesar ran through India, Ashwin failed to make an impact in home conditions. He was subsequently dropped in away Tests as well. In the last year-and-a-half Ashwin has come back strongly by forming a deadly combination with Ravindra Jadeja in spinning conditions. Ashwin's great run began during the Sri Lanka tour last year, after India lost the first Test at Galle. Since, Ashwin has been on top of his game, and India haven't lost a Test.

Ashwin has played stellar roles in India's Test wins at home, as they dislodged South Africa, New Zealand and more recently England. While his bowling has been classy, one cannot but conclude that Ashwin's steady and consistent batting has also played a role in his selection as the cricketer of the year. Not only did he add a couple of more hundreds to his tally against West Indies, but was among the runs versus the others as well. Impressively, a lot of his runs have been tough ones, coming under tricky circumstances. A bigger challenge still awaits Ashwin though. He is yet to prove his mettle away from home. And thus, when India travel, he will have a point to prove.

Home over away, success has not been a problem for Indian captain Virat Kohli. Thus, it is rather surprisingly that he does not find a place in the Test team of the year. He scored runs all over across all formats. Yet, he could not join Ashwin in ICC Test team of the year. That should only inspire Kohli to do better. He did get another significant recognition though being chosen as the captain of the ICC ODI eleven. It would be interesting to note that while Kohli leads in the Tests, MS Dhoni is still India's one-day captain. Yet, ICC found him good enough to be named as one-day captain of a World XI. It remains to be seen how soon the Indian selectors take a call on the issue. 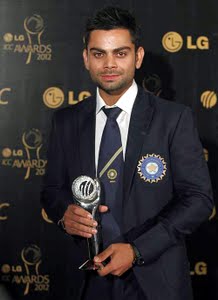 While Ashwin is the lone Indian in the Test XI, they have better representation in the one-day side. Apart from Kohli, Rohit Sharma and Ravindra Jadeja also find places in the eleven that includes international stars like David Warner, AB de Villiers, Quinton de Kock and Mitchell Starc. The selection of three Indians is vindication of them being among the most dangerous one-day sides in international cricket. While Kohli is a rather obvious choice, Rohit is extremely dangerous at the top of the order. As for Jadeja, he is a complete package. A tight bowler, useful batsman and lighting quick fielder. Don't be surprised, if he finds at place in the Test XI next year.