Pakistan put up a shabby batting performance on day one of the Sharjah Test, being bowled out for a paltry 234, after winning the toss and batting first

Pakistan put up a shabby batting performance on day one of the Sharjah Test, being bowled out for a paltry 234, after winning the toss and batting first. James Anderson, who hadn’t had a great time in the series so far, rose to the occasion, claiming 4 for 17 in 15.1 overs, including the massive scalp of opposition skipper Misbah-ul-Haq, who top scored with 71. Stuart Broad gave Anderson brilliant support, claiming 2 for 13 in 13 overs. Spinners Samit Patel and Moeen Ali chipped in with a couple of wickets as well as England’s bowlers dominated the opening day of a must-win Test for them. The openers then batted out two overs safely.

Pakistan suffered because a lot of their batsmen got starts, but only Misbah went on to cross the half-century mark. At the top, Mohammad Hafeez made 27. Shoaib Malik and Younis Khan fell in the 30s as did Sarfraz Ahmed. In fact, Pakistan had lost half their side for 116, and it was thanks to the sixth wicket partnership between Misbah and Sarfraz that he got close to 200. Ahmed and Misbah were attacking in their partnership, which marked Pakistan’s only period of dominance during the crucial first day of the Test. 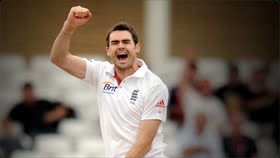 Ahmed began by slamming Patel for a couple of fours early in their innings. Misbah then launched Adil Rashid straight down the ground. The duo found a couple of more fours before England tightened their line. After a few quiet overs, Misbah again opened up against Rashid. Just when Pakistan were beginning to recover, Ahmed gave it away, by slogging Ali into the hands of deep midwicket for 39. Patel then claimed Wahab Riaz for a second ball duck. He tossed one up at leg stump, and got it to hit the middle.

Pakistan’s collapse had well and truly begun. Misbah, aware of the same, reverse swept Patel for two fours and a then smashed a six over wide long on. The second new ball accentuated Pakistan’s downfall. Broad got Yasir Shah with a short ball, and Anderson then took out the well-set Misbah with one pitched outside off, to which the Pakistan skipper played an ungainly punt, and nicked behind. The innings came to a swift end as Rahat Ali swiped at one outside off stump. Anderson had his fourth as Ali took the catch at fourth slip.

Anderson and Broad bowled brilliant spells earlier in the day to stifle the Pakistan batting. Anderson had comeback man Azhar Ali in the third over of the day with one that nipped away. Hafeez, after getting to 27, hit Ali into the hands of midwicket. Malik hit five crisp fours in his 38 but played a loose prod against Broad. Younis reached 31, and was then trapped lbw by a low full toss. A review proved unsuccessful. Patel then got Asad Shafiq caught behind as the hosts lost half their side. There was a mini-recovery, but England were back on top following Ahmed’s brain freeze.