Sunday saw Alex Hales, the T20 replacement of Kevin Pietersen for England, score a magnificent 99, which helped his team chase down a stiff target of 172 set by West Indies, in the only T20 game played at Trent Bridge.

Sunday saw Alex Hales, the T20 replacement of Kevin Pietersen for England, score a magnificent 99, which helped his team chase down a stiff target of 172 set by West Indies, in the only T20 game played at Trent Bridge. Hales’ match-winning knock came off 68 deliveries, and featured six fours and four sixes. It was a knock which proved that all the hype built around Hales being the next big T20 played wasn’t for nothing. As Hales celebrates his moment in the sun, we look back at some of the magnificent knocks played in the short history of T20.

This is arguably among the best T20 knocks ever even though it came in a losing cause. The occasion was the inaugural T20 World Cup in 2007 and Chris Gayle, opening the batting in the game against hosts South Africa, blasted 117 runs, a blitzkrieg of an innings, which featured an unbelievable 10 sixes and seven fours. Thanks to Gayle’s brilliance, West Indies managed to amass an improbable 205. Unfortunately for Gayle, the knock wasn’t enough to earn the side a victory, for the Windies bowlers were not strong enough to restrict South Africa. Gayle still won the man of the match award. 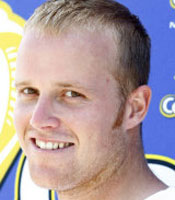 The South African opener was playing in only his second T20 game, in which he smashed the New Zealand bowlers all over the park at Hamilton. Chasing a stiff target of 174, the Proteas needed a quickfire start, but what Levi gave them was beyond expectations. The 24-year-old slammed 13 sixes and 5 fours en route to his 51-ball unbeaten 117. Levi’s knock is the fastest T20 hundred in international cricket till date. The opener’s swashbuckling innings took South Africa to victory with as many as four overs to spare.

Raina may have failed to live up to potential in the Test scenario, but in the T20s he is in a zone of his own. The southpaw’s best knock in the format came in the 2010 World Cup against South Africa. Bludgeoning the bowlers all over the park, Raina raced to 101 in a mere 60 balls. The innings featured five fours and nine sixes, some of them monster hits. Raina’s knock led India to a 14-run win the game.

Another batsman ideally suited to the T20 format, McCullum smashed a top Aussie bowling line up all over Christchurch in 2010. His 116 took just 56 deliveries and was bejeweled with 12 fours and eight sixes. McCullum’s extraordinary effort took the Kiwis to 214, a score Australia did incredibly well to register themselves, as the game ended in a tie.