Former India captain and ex-Team Director has claimed that a few countries are trying to utilise the current problems in BCCI to their advantage, and warned that these nations are making a mistake by doing so.

Former India captain and ex-Team Director has claimed that a few countries are trying to utilise the current problems in BCCI to their advantage, and warned that these nations are making a mistake by doing so.

Shastri went on to add that the BCCI must demand every penny it deserves from the ICC considering it is the biggest revenue generator.

Shastri, who was a front-runner for the post of Team India coach before Anil Kumble took over, told Cricbuzz in an interview, over those allegedly trying to take advantage of the situation, "My warning to such people is: beware... This state of flux will not last for long. BCCI will be back where they belong very very soon. And that is why it is important that the BCCI stresses on the issues at hand." 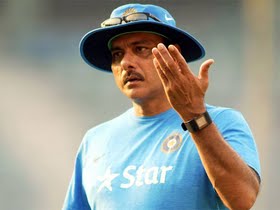 BCCI is currently facing a massive crisis over Lodha Committee's recommendations, which has resulted in the SC removing Anurag Thakur as President and a few others.

On BCCI, demanding a larger share of the revenue, Shastri added, "I was very pleased that the committee that went to Dubai for the ICC meeting really took up the issue with the ICC board. (Vikram) Limaye, Anirudh (Chaudhry) and Amitabh (Choudhary) - I'm glad they made the BCCI's reservations very clear. In my mind, India deserve every penny that they get from ICC tournaments, simply because they are the Pied Pipers of world cricket," he said.

"Something like 80% of revenues for these tournaments come from India. Then to say that India is the bully, because they are asking for extra share, is the biggest load of bullshit I've heard. I say this because the BCCI is not asking for 80%, they're asking for a much lower percentage. They have every right to. You take India out of the equation, I'd like to see what kind of revenue will be left," he added.

Shastri rubbished allegations because he was benefiting financially from BCCI. "I've worked all around the world. If I am something today it is because of the opportunities the BCCI gave me, but not as a commentator. It is what the BCCI did for me as a player, a cricketer, people should get that clear in their minds. That is the most important role of a cricket board," he went on to say.