India series will be massive test for Morgan, Bairstow

For any young cricketer, a visit to the subcontinent is among the biggest tests of his career. This applies very aptly to Eoin Morgan as well as Jonny Bairstow, both of whom batted exceptionally well in the practice game against Mumbai A and rescued their side from trouble.

For any young cricketer, a visit to the subcontinent is among the biggest tests of his career. This applies very aptly to Eoin Morgan as well as Jonny Bairstow, both of whom batted exceptionally well in the practice game against Mumbai A and rescued their side from trouble. The Test matches against India, however, will be a totally different proposition. Remember, the Englishmen haven’t been given any spinners in either of the tour games so far. That is possibly one of the reasons why they have looked rather comfortable out in the middle. 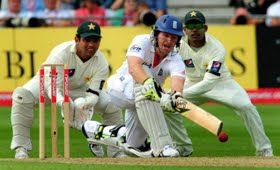 Everyone is aware of England’s woes against spin. Saeed Ajmal exposed the same to the hilt when the Englishmen visited the UAE. Morgan went into the series with a reputation of being among the better players of spin in the England side. However, he had a horrendous seriesand returned not only with reputation shattered, but also lost his place in the Test side. Since, the left-hander has had an up and down time in the shorter version games as well. But, recently, he has batted well. In the victory against Australia, he was especially impressive, as a result of which he has come back into the reckoning for the Test side.

Morgan’s game is heavily suited to the shorter formats of the sport. However, his skills are rated very highly in England, as a result of which he finds himself back in the Test squad for the gruelling tour of India. There is little doubt that Morgan has the talent to succeed even in tough conditions in India -- what he needs to work on is his batting style, which borders on the cheeky. If Morgan can get his mindset right, and pick and choose his strokes, he could be the man who can trouble India. After all, spinners from India have traditionally struggled against opponents, who are willing to attack them albeit by taking risks sensibly.

The case is rather similar with Bairstow. He stormed on to the international scene with a brilliant counter-attacking innings in an ODI during India’s tour to England last year. Since then, however, he has gone through some indifferent times, and hasn’t been a permanent fixture in the England squad. Owing to lack of options, Bairstow was given an opportunity to represent the side in the home Tests against West Indies. He couldn’t make much use of the opportunity though.

The only reason Bairstow won a Test cap against South Africa was because Kevin Pietersen wasn’t selected owing to disciplinary reasons. And although England couldn’t win the game, Bairstow came out of the game with his reputation enhanced. He played two brilliant knocks in both innings, falling short of a hundred by five runs in the first essay, and compiling a fighting half-century in the second. The combination of these qualities is what can bring success to Bairstow in India as well. In spite of their inexperience, Morgan and Bairstow will be key to England’s fortunes, especially in the manner they tackle India’s spinners in helpful conditions.