An IPL battle in CLT20

Wonder how Virender Sehwag and Gautam Gambhir, who were part of India’s disappointing World T20 campaign, would be feeling at the moment. Both continued their poor form in the mega tournament, and now are up against each other. Even though Sehwag has relinquished the captaincy of Delhi Daredevils, the tussle between him and Kolkata Knight Riders’ skipper Gambhir would be followed with keenness by some – if for nothing else then to decipher why they struggle more when they play for India as opposed to when they represent their respective franchises. KKR may have become the IPL champions, but that doesn’t make them the favourite as they take on the Daredevils. 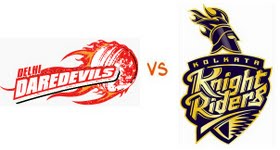 Looking at the squad they possess, it isn’t difficult to figure out why Kolkata emerged as the champion side in the IPL. In Gambhir, they had a captain who led from the front with the bat. He found excellent support from teammates Jacques Kallis as well as Brendon McCullum and even the local lads like Manvinder Bisla and Manoj Tiwari. As such, the Kolkata batting hardly ever failed, and it was the key reason behind KKR’s somewhat unexpected triumph in IPL 5. These men will have to stand up and deliver with the bat all over again if KKR are to perform to ability in the CLT20 as well.

As for their bowling, KKR possess a lot of talent men in this aspect as well, none better than Sunil Narine, who bamboozled most batsmen with his variations. The performance of speedster Brett Lee, who has retired from international cricket, would also matter a lot, since he would be the team’s spearhead again. Further, KKR will be keen to get good performances from T20 specialist Laxmi Balaji, Kallis as well as Shakib Al Hasan. While the former Bangladesh skipper performed with both bat and ball during IPL 5, his tight overs played a major role in the side’s success.

It is rather easy to comprehend the Daredevils’ strength. Virender Sehwag, David Warner and Kevin Pietersen -- these three names at the top of the batting order can give goose bumps to any opponent. And even though the Indian opener struggled during the World T20, he would count upon his success in the IPL to deliver in South Africa. As for Warner, he has a mixed World T20, and would be looking forward to getting back among the runs. The most intriguing case among the trio is that of Pietersen. The man, who is likely to be back in the English fold, soon, was an analyst during the World T20. He will now have to put back the Delhi jersey and resume his duties as if nothing happened in the interim.

In the bowling department, Delhi will bank on the experience of Morne Morkel. Being a South African, the fast bowler would know the conditions well and that could aid him in putting up an impressive performance. Among the Indian bowlers, skipper Mahela Jayawardene would rely on Irfan Pathan, who has proved T20 credentials. There is Umesh Yadav as well, who can be quite handy on his day. All the hints point towards a close contest.