South African’s fast bowling genius Dale Steyn has announced his retirement from all forms of cricket. Taking to Twitter, the speedster, who wreaked havoc around the world, informed of his decision to bring down the curtains on his glorious career. The 38-year-old veteran featured in 93 Tests, 125 ODIs and 47 T20Is for South Africa, finishing his career one short of 700 international wickets - 439 of them came in the longer format of the game.

Steyn had announced his retired from Test cricket in August 2019 due to constant injury issues. His last ODI was against Sri Lanka at Port Elizabeth in March 2019 and last T20I against Australia at Johannesburg in February 2020.

Sharing an emotional statement on Twitter, Steyn wrote, “And it’s been a long December and there’s reason to believe maybe this year will be better than last. I can’t remember all the times I tried to tell myself to hold on to these moments as they pass. 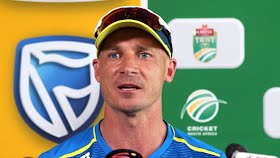 Sharing an emotional statement on Twitter, Steyn wrote, “And it’s been a long December and there’s reason to believe maybe this year will be better than last. I can’t remember all the times I tried to tell myself to hold on to these moments as they pass.

“Today I officially retire from the game I love the most. Bitter sweet but grateful. Thank you everyone, from family to teammates, journalists to fans, it’s been an incredible journey together,” he added in his statement.

Steyn represented Royal Challengers Bangalore in IPL 2020 but featured in only three matches and could not make much of an impact. He also played in the Pakistan Super League earlier this year.

Steyn added that, growing up, he watched Shane Warne, Allan Donald and Curtly Ambrose and what they did on the field with intimidation and how they got wickets. “I thought I could pretty much bring that into the way I play cricket and it became part of a really, good act. It’s theatre. Nobody wants to play against this teddy bear and I wanted to get people scared and have that fear factor around myself,” Steyn added in the interview.