Tags: Under-19 World Cup, Unmukt Chand, India Under-19, Australia Under-19

A superb unbeaten century from Skipper Unmukt Chand led India to a thrilling 6-wicket win over Australia in the ICC Under-19 World Cup 2012 Final at the Tony Ireland Stadium in Townsville.

A superb unbeaten century from Skipper Unmukt Chand led India to a thrilling 6-wicket win over Australia in the ICC Under-19 World Cup 2012 Final at the Tony Ireland Stadium in Townsville. This is the third time that India has won the Under-19 World Cup – first was in 2000 in Sri Lanka under Mohammad Kaif, second time in Malaysia in 2008 under Virat Kohli.

Bowling first after winning the toss, India had Australia in all sorts of trouble at 38 for 4 by the 12th over. However, a Captain’s knock of 87* (from 120 balls with 6 fours) from William Bosisto and a solid knock of 43 (from 50 balls with 3 fours and a six) from Ashton Turner helped the Aussies recover to post 225 for 8. For the Indians, opening bowler Sandeep Sharma claimed 4 for 54. 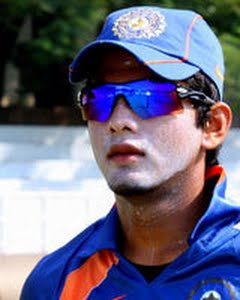 India in the run chase were going along smoothly thanks to the 2nd wicket stand between Skipper Unmkut Chand and Baba Aparajith. In the 15th over, the match changed with Baba Aparajith (33 from 38 balls) getting caught by a diving Turner at covers to have India at 75 for 2. Australia fought their way back strongly to reduce India to 97 for 4 by the 25th over.

Things got really tough for India as Unmukt Chand seemed to be losing partners while the required run rate was shooting up. Fortunately for him, Wicket Keeper Smit Patel played the supporting role to perfection to put up a match-winning stand of 130 with his Skipper. Smit Patel remained unbeaten on 62 from 84 balls with 4 fours. The Man of the Match – Unmukt Chand played his big shots at the right time to steer India to victory with 14 balls to spare thanks to his heroic 111* from 130 balls with 7 fours and 6 sixes. His counterpart - William Bosisto, the Australian Captain was named as the Man of the Tournament.