Veteran England batsman Ian Bell has been dropped from the England Test squad for the series against South Africa, after a decade during which he was constant figure in both the Test and ODI format.

Veteran England batsman Ian Bell has been dropped from the England Test squad for the series against South Africa, after a decade during which he was constant figure in both the Test and ODI format. While his one-day career was finished once the selectors decided to drop him in favour of youngsters, his international career seems in jeopardy now as he hasn't been picked for the Tests as well. Although he has been getting starts in recent times, Bell hasn't converted those into big knocks, which is perhaps why the selectors were disappointed with him. At 33, Bell chances of adding to his 100 plus Test appearances are not great.

The selectors, while dropping him, have stated that Bell deserves a break, and the man himself has vowed to win his place back in the team. As Bell works towards the same, we look back at the numbers that have caused Bell to lose his place in the Test team in the first place.

Hundred drought: As mentioned earlier, Bell has been getting constant starts for England, but unlike at his peak, he has not converted most of them into big knocks. Since July 2014, he has only two Test hundreds to his name -- 167 vs India at Southampton on July 2014 and 143 against West Indies at North Stand in April 2015. This was his last Test hundred, and as can be observed, the gap between the two hundreds is also a significant one considering the kind of experience Bell possesses. 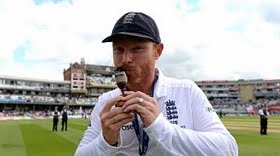 Series-wise breakdown since last Test hundred: In the second innings of the North Stand Test against West Indies, Bell made 11. In the next Test against the same opponent, he registered 1, and in the following Test at Bridgetown, he finished with a duck in each innings. England then featured in two Tests against New Zealand, and while the series was closely fought, Bell's struggles continued. He had poor scores of 1, 29, 12 and 1.

A bigger test awaited Bell as the Aussies came visiting for the 2014 Ashes. While England registered a comprehensive series triumph to reclaim the urn, Bell's career went into further decline. He began with 1 and 60 at Cardiff. In the second Test of the series, he managed only 1 and 11. At Birmingham, he played a key role in England's victory with 53 and 65 not out, but again the big scores were missing. Bell finished the Ashes with disappointing scores of 1, 10 and 13.

In October 2015, Bell began the first Test against Pakistan with a 63 at Abu Dhabi, and remained not out on 5 in the second. At Dubai, he made 4 and 46, and at Sharjah, he finished with 40 and 0, giving further indication of his wavering powers of concentration.