Indian batsmen continued their domination over South African bowlers on Day 1 of the second Test at Pune on Thursday. Opener Mayank Agarwal hit his second hundred

Indian batsmen continued their domination over South African bowlers on Day 1 of the second Test at Pune on Thursday. Opener Mayank Agarwal hit his second hundred of the series in as many Tests while Cheteshwar Pujara and skipper Virat Kohli contributed half-centuries as India finished the day at an impressive 273 for 3 in 85.1 overs when bad light halted play. At stumps, Kohli was unbeaten on 63 and Ajinkya Rahane on 18.

Agarwal, who had made 215 in the opening Test, this time made 108. In spite of being hit on the helmet by Anrich Nortje, the opener looked in charge for most of his innings. He hit 16 fours, including one-off Vernon Philander to bring up his hundred, in addition to two sixes. Agarwal and Cheteshwar Pujara featured in a 138-run second-wicket stand after Rohit Sharma departed cheaply.

Rohit, who made twin hundreds at Vizag, was sent back caught behind by Kagiso Rabada for 14. Pujara was dropped by Temba Bavuma at forwarding short leg when he hadn't opened his account and went on to complete his 22nd Test fifty. He was eventually dismissed by Rabada, caught by Faf du Plessis in the slips for 58. 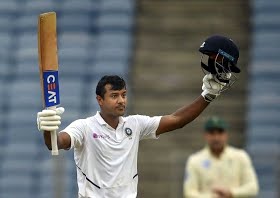 Agarwal could not convert his hundred into a big one as Rabada got his third scalp by having him caught behind. From 198 for 3, Kohli and Rahane added 75 for the fourth wicket to take India to stumps without any further trouble.

After the day’s play, Agarwal and Pujara had a chat session, in which Agarwal credited the A tours for the turnaround in his cricketing fortunes, after being on the verge of being dropped from the Ranji team.

“God has been very kind giving me a lot of runs. But there is a difference between domestic and international cricket. We must give credit to BCCI for giving us that many 'A' tours as it has helped to bridge the gap. Having played in New Zealand just before flying to Australia really helped when I made my Test debut,” Agarwal said.

On the rigors of domestic cricket, he added, "Ranji trophy is the kind of tournament that really tests you as a player, you are going to play eight games over two and a half months - even 10-11 games if you make the knockouts. Playing in different parts of India in different conditions. It really prepares you well for higher grade cricket.”

On a lighter note, Pujara asked Mayank about what he had been eating for the past few days since he was scoring so many runs, to which the opener replied, "Simple, South Indian idlis - 2 of them with some coconut chutney and sambhar.”