New Zealand all-rounder Jimmy Neesham took a hilarious dig at the International Cricket Council (ICC) after cricket’s governing body, on Monday, announced that the controversial boundary rule that declared England 2019 Cricket World Cup winners will no more be used. The 2019 World Cup final was tied after both teams faced 50 overs, and the situation was same even after the Super Over, as both teams scored same number of runs. However, England were declared winners, having hit more boundaries.

Taking to Twitter, and hinting that the decision came too late, Neesham posted, "Next on the agenda: Better binoculars for the Ice spotters on the Titanic".

The ICC announced, on Monday, that in case of a tie in the Super Over of the World Cup final, another Super Over will be played to decide the eventual winner. The ICC media release said, "the Chief Executives' Committee agreed that use of the Super Over as a way to decide results at ICC events will be retained" 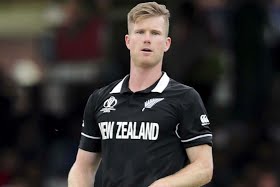 "Both the Cricket Committee and CEC agreed it was an exciting and engaging conclusion to the game and will remain in place covering all games at both ODI and T20I World Cups.

The decision to hand the World Cup 2019 trophy to England on the basis of the superior boundary count rule led to widespread criticism of the ICC. New Zealand batted first in the final at Lord’s and posted 241 for 8. Ben Stokes’ genius them lifted them to 241 all out. This was followed by the Super Over, which also ended in a tie.