The third and final one-day international between Pakistan and Zimbabwe ended in no result due to rain on Sunday as the home team clinched the series 2-0.

The third and final one-day international between Pakistan and Zimbabwe ended in no result due to rain on Sunday as the home team clinched the series 2-0.

Match abandoned due to rain 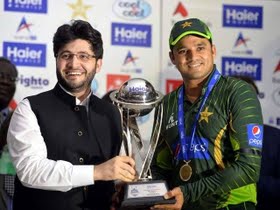 Zimbabwe's target was revised to 281 in 46 overs on the Duckworth/Lewis method after a dust storm and power failure stopped play for 52 minutes.

But heavy rain arrived after only one over when play resumed and it didn't subside before umpires called off the match with Zimbabwe cruising at 68-0 in nine overs.

Azhar Ali, Pakistan captain and Man of the Series: It is a great team effort. When the captain is in form, it becomes easy for the team. Babar Azam has performed well. The new boys are doing well and we have to take it forward from here. It has been a big series for us and Zimbabwe. We will correct the minor mistakes in the future series. I think the security was amazing. Credit goes to Pakistan government, Punjab police and Zimbabwe Cricket.

Earlier, after Pakistan won the toss and elected to bat, opener Hafeez made a run-a-ball 80 and 20-year-old newcomer Babar Azam scored 54 in his first ODI before Anwar Ali smashed 38 off 23 balls in Pakistan's total of 296-9 to give Pakistan hopes of a 3-0 sweep.