A surprising all-round show from Sunil Narine and a sprightly half-century from Gautam Gambhir enabled Kolkata Knight Riders to beat Kings XI Punjab by eight wickets at the Eden Gardens in Kolkata on Thursday.

Gambhir hit an unbeaten 72 off 49 balls as Kolkata chased down 171 in 16.3 overs. In a surprise move, Sunil Narine was sent at the top of the order and responded with 37 from 18 balls. Gambhir and Narine added 76 off 34 balls as KKR eased to victory. 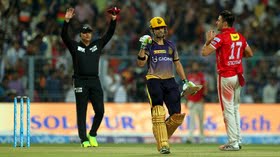 Manish Pandey ended the game with a six and was unbeaten on 25 while Robin Uthappa made 26 to hand Punjab their first loss of the season. Earlier, Umesh Yadav claimed four wickets as Kolkata Knight Riders kept Kings XI Punjab down to 170/9.

Yadav struck thrice in his fourth over to turn the game. KXIP were 95/2 after 10 overs when Umesh dismissed opposition skipper Glenn Maxwell for 25 off 14.

And, once Gambhir and Narine had that blistering opening stand, the game was in KKR's bag.