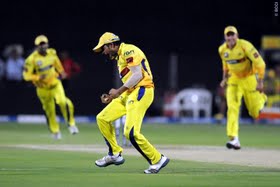 Dhoni is the Man of the Match: "Well I think the platform for there. We needed those runs. We slowed down in the middle. On these kinds of wickets, you never know what is a good target, we did well in keeping wickets in hand. 160 is a good benchmark for wickets about which you know nothing about. It's important we don't really eye 180 everytime. Mohit has played a lot of Delhi cricket, city cricket makes you street smart, he has played lot of those games. He bowls with full effort, he has shown improvement in the last few games. I don't think we would really rest anyone, I think it's important to continue playing your best XI. This year hasn't been too hot, so I am not complaining about the weather."

Aaron Finch: "It's always hard to stop MS and Raina played beautifully, so it's back to the drawing board for us. (On this pitch) If you bowled the right length, you would get rewarded and it slowed down later. To knock teams out from getting into the finals is one motivation that we can play for. The fielding was a positive, but those last five overs turned the match."

Robin Uthappa and Aaron Finch have four half-century opening stands in seven innings this season, the most by any pair.

During his innings against Knight Riders, Suresh Raina became only the second player to tally 100 sixes in the IPL, behind Chris Gayle.