Virat Kohli has earned praise from none other than former Aussie skipper Steve Waugh after his brilliant knock of 149 at Edgbaston.

Virat Kohli has earned praise from none other than former Aussie skipper Steve Waugh after his brilliant knock of 149 at Edgbaston. Waugh termed Kohli as the batsman with the best technique in world cricket, but added that disgraced Australian Steve Smith remains the hungriest. 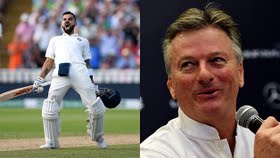 Waugh though added that while Kohli liked to rise to the big occasion, it remained Smith who seems the hungriest.

“I think Steve Smith is probably the hungriest batsman but he’s obviously not playing for 12 months, so Kohli really is the premier batsman in world cricket. And he likes the big occasion. Like Lara and Tendulkar an Richards and Javed Miandad, and all the great batsmen, they want the big occasion and that brings out the best in their cricket,” Waugh, who enjoyed many great tussles against India added.