A comprehensive victory for DD against the table topper CSK 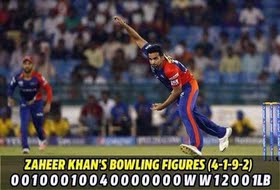 Opting to bat first, Chennai Super Kings openers got nowhere and struck in a phase where they neither hit boundaries nor even able to rotate the strike. They managed only 16 runs in the powerplay and it speaks volume about the bowling display of Delhi Daredevils specially Shahbaz Nadeem and Zaheer Khan. DD’s bowlers were able to keep the most attacking opening pair of IPL quite. They seemed to be running out of idea and had no clue how to tackle the bowers and kept wasting the balls. Even Brendon McCullum struggled to get going and only managed 11 runs off 21 balls before getting caught at mid-off by Duminy. This exposed the middle order of CSK who doesn’t have much to show in this IPL season. Raina and Smith also perished as they have not managed to score any significant score from few matches now. Faf du Plessis and skipper MS Dhoni did score some run but couldn’t carried their inning forward to give CSK a respectable total. CSK only managed 119 runs from their quota of 20 overs at loss of six wickets.

Shahbaz Nadeem was very economical, conceding only 18 runs in his four overs and he restricted the CSK openers to get to off a flying start. Zaheer Khan took 2 wickets for 9 runs at just over two runs per over and he was adjudged man of the match. This is the first time that Zaheer Khan has been the man of the match in 76 IPL matches he has played.

Chasing a below par score of 120 runs, Delhi Daredevils started their inning in a positive manner and they put all the bad balls away for boundaries. CSK bowlers bowled too many short and wide deliveries both sides of the wicket which helped the DD batsmen. Though Ishwar Pandey took 2 wickets early in the inning, but this too was not enough to stop the flow of runs and they kept leaking the runs. Shreyas Iyer was absolutely brilliant in his 49-ball 70 runs unbeaten inning which was laced by 10 boundaries and a six. He added 69 runs with Yuvraj Singh(32) for the third wicket which almost took the game away from Chennai Super Kings. Iyer got a lucky escape when Mohit Sharma dropped him early in his inning. In the end, DD achieved the target at the loss of 4 wickets and 20 balls to spare.

Bowling from Chennai was below average except Ashwin who flight the ball but didn’t get enough support from the out fielders. Mohit Sharma and Ishwar Pandey didn’t bowl the right line and allowed the batsmen to get settle in. Dhoni also made blunder by bringing Ashwin too late.

With Chennai Super Kings losing this match, this made the points table wide open. Royal Challengers Bangalore and Sunrisers Hyderabad can also fancy their chances now to go on top two of the table.