Would love to see two spinners in England, Australia: Kumble

Even as the cricketing fraternity is divided over the decision to not use saliva on the ball when cricket resumes following the forced break due to Coronavirus, ICC's cricket committee and former India spinner Anil Kumble opines that it is time cricket pitches offer more to bowlers. In fact, the legend who has 619 Test wickets to his name added that teams must start considering use of two spinners in places like Australia and England as well.

"The advantage that cricket has over other sports is that there is an element of adjustable variance in the pitch, which not many sports have. You could manage the pitch in such a way that you could bring about a better balance between bat and ball," Kumble said during a webinar, organised by the Federation of Indian Chambers of Commerce and Industry (FICCI). 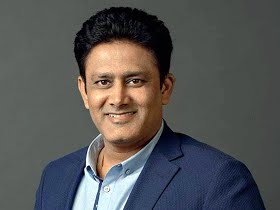 Reiterating that the decision to recommend the ban on use of saliva was made considering the major risk factors involved, Kumble admitted players will have to adjust to the change temporarily.

"Based on medical advice, we believe that saliva could be the major contributor to carrying this disease and that's why we banned the use of saliva, although it's second nature in cricket. That's something that players will find hard to manage," he added.

Whether you are the serious kind of player that would watch out or just a casual bettor who would occasionally bet on one team, you should know and understand the risk and rewards of online cricket betting. Cricket will be hotter than ever once the internationals return, and if you want to spark it up with some betting, bettingonline.co.uk got you covered!

Only the second bowler to pick up all 10 wickets in a Test innings, the former India captain further opined that the current situation should actually be seen as an opportunity to bring spinners back in the game. According to him, pitches can be roughed up so that two spinners can be included in the playing eleven even in countries like Australia and England.

"You can probably leave grass on the surface or even rough it up and have two spinners. Let's get spinners back in the game in a Test match. Because if it's a one-day or T20 game, you're not worried about the ball or shining of the ball. Sweat can certainly take care of that.

"So, in cricket you have the surface you can play around with and bring about a balance between bat and ball. All of us are yearning to start the game and not really worried about saliva or sweat or condition of the ball - we just want to play cricket," Kumble further stated in the webinar.