In a game where both sides underperformed, one man made the major impact with both bat and ball, strong enough for his side – Kings XI Punjab –to register a surprise win over the fancied Kolkata Knight Riders at Mohali.

In a game where both sides underperformed, one man made the major impact with both bat and ball, strong enough for his side – Kings XI Punjab –to register a surprise win over the fancied Kolkata Knight Riders at Mohali. Manpreet Gony, whom this writer had prominently mentioned in his piece ‘Meet the forgotten stars’, came up with a wonderful all-round performance, to almost singlehandedly lead his side to victory over Gautam Gambhir’s men on Tuesday. What made the innings even more astonishing was the fact that this was Gony’s first game of the season, after having been lost in the wilderness over the last couple of years.

Gony’s knock was special in the sense that it came after Sunil Narine had registered a magnificent hat-trick, as a result of which Punjab were all but down in the dumps. However, Gony proved everyone, who believed that he had been grossly underperforming over theseasons, absolutely right. On a day when he sizzled to full potential, Gony displayed his full range of strokes, exhibiting his ability to clear the field with utmost ease. His 18-ball knock, which featured as many as four fours and three sixes, did not take Punjab to a match-winning score, but gave them a fighting total, and also the psychological edge as they went into the halfway stage. 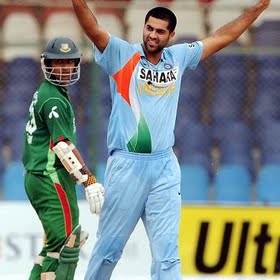 It was Gony again who did the job with the ball for Punjab. At one stage, KKR were cruising courtesy another impressive half-century by their skipper Gautam Gambhir, whose quickfire knock ensured that the side easilyrode over the big losses of Manvinder Bisla and Jacques Kallis with hardly any runs on the board. Gambhir looked in no trouble at all during his time in the middle, but this was just Gony’s day, and he managed to eke an edge out of Gambhir’s fluent bat. Although KKR were still the favourites, the dismissal gave Punjab just the kind of opening they needed.

The game changed completely after Azhar Mahmood managed to find the leading edge of a well-set Eoin Morgan’s bat. Till the time Irish left-hander, who plays for England, was at the crease, KKR held the upper hand. But as soon as he fell following a fluent innings, KKR’s weakness in the lower order was exposed. The big-hitting Yusuf Pathan is not the player he once used to be, and his lack of confidence was yet again evident, which did not help the team’s cause. Manoj Tiwary was also tested out by the short ball, and the dot balls he faced put KKR further on the backfoot.

What Punjab did very well in the match was stay in the hunt every time they found themselves in trouble. With the bat, they found themselves in all sort of strike following Narine’s hat-trick, but they managed to fight back and ended with a highly competitive score. Then, while bowling, they also picked wickets at crucial junctures, to never allow KKR to run away with the match. Punjab must thank Gony for both.

Turning point of the game: Eoin Morgan’s dismissal for 47 in the 15 over.