While keeping the merits of inviting Pakistan for a short tour aside, I think Christmas Day at Bangalore produced an interesting cricketing contest. Both India and Pakistan keep on producing thrilling games against each other probably because the two teams have their shares of problems and strengths to come up with see saw kind of battles.

While keeping the merits of inviting Pakistan for a short tour aside, I think Christmas Day at Bangalore produced an interesting cricketing contest. Both India and Pakistan keep on producing thrilling games against each other probably because the two teams have their shares of problems and strengths to come up with see saw kind of battles. The first T20I was just like that with the Indian batsmen not coping up with the attacking Pakistani bowling and then the Pakistani batsmen struggling against quality seam and swing bowling.

Tonight the arch-rivals battle for the second T20I at the Sardar Patel Stadium in Motera. The pressure is on India to win this match and draw the 2-match series. An Indian victory is more likely to be on the cards as such short series usually produce mixed results for both the sides. That is what is my gut feeling, now whether that is scripted or destined, I do not know but rarely you get to see one of the teams getting beaten badly by the other in recent history. 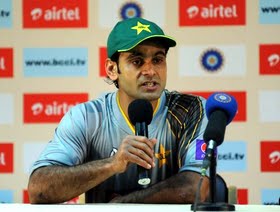 The first T20I was very refreshing to watch because of two new talents being displayed to the world. Mohammad Irfan, the 7ft 1 inch giant showed that he was just not tall but also very quick by consistently clocking around 145 kmph and making the Indian batsmen hop around. Hopefully, Irfan can turn out to be the next great bowler that the entire cricketing world is starving for in recent times.

India will be thrilled with the entry of Bhuvneshwar Kumar. After Irfan Pathan, India seems to have got the much needed pace bowling all-rounder it has been searching for all along. Bhuvneshwar swung the ball beautifully and as a bowler he looks to be a yard better than Praveen Kumar for the slight extra speed that he has.

One thing is for sure, India messed it up by not including R Ashwin in its playing XI in the first T20I. India left too many overs – 8 to be bowled by its part timers and that was where Pakistan recovered to win the match. Ashwin could be brought in at the cost of Ravindra Jadeja whose bowling hasn’t been really effective in the shortest format of the game.

I have a strong opinion that India doesn’t need Gautam Gambhir in its T20 line-up. Gambhir did a fabulous job in the 2007 T20 World Cup in South African conditions. However, India need not have him in home conditions where batting isn’t all that tough. Gambhir of late hasn’t done much and his innings in the 2nd T20I against England most recently was simply pathetic and against Pakistan wasn’t on par for Twenty20 standards. One of the middle order batsmen can easily take his place. The likes of Rohit, Raina and Jadeja bring more value to the team with their part-time bowling and brilliant fielding than Gambhir.

Plenty of sports to choose from betting-sites.in and enjoy HD quality live casino games from all around the world.