Hashim Amla and South Africa’s band of 150 plus

By scoring a wonderful 150 against England in the second ODI at Southampton, Hashim Amla joined a select list of Proteas batsman who have registered 150 or more in one-day internationals.

By scoring a wonderful 150 against England in the second ODI at Southampton, Hashim Amla joined a select list of Proteas batsman who have registered 150 or more in one-day internationals. And while Amla enjoys his moment in the sun courtesy his magnificent knock that featured 16 hits to the fence, we look back at the other South African players who got there before him. 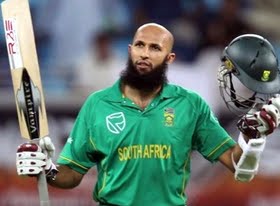 Gary Kirsten: 188* vs UAE at Rawalpindi (1996): Yes, the opponents were minnows, but the runs still had to be scored, and remember this was a World Cup game. UAE won the toss and decided to field, and they were made to rue the decision in a big way. After adding 60 for the opening wicket with Andrew Hudson, Kirsten went on a run making spree in the company of skipper Hansie Cronje. The far from elegant left-hander was never known as a six hitter, but in this particular knock he blasted as many as four of them apart from 13 fours. Thanks to Kirsten, South Africa plundered 321, and won the match easily.

Herschelle Gibbs: 175 vs Australia at Johannesburg (2006): This knock should go down in history as one of the greatest ODI knocks ever. Australia had batted first and amassed 434 courtesy Ricky Ponting’s brutal 164 and half-tons from Adam Gilchrist and Mike Hussey. Not even the Gods would have given South Africa a chance of winning. But, with the pressure of victory off their backs, the Proteas came out all guns blazing, led by Gibbs, who tormented the Aussie bowlers during his unbelievable knock that featured 21 fours and seven massive sixes. Gibbs fell with the target still some distance away, but he and Graeme Smith (90) had given enough cushion to the middle and lower order to take the team home in the end. A few years earlier, Gibbs had famously ‘dropped’ the 1999 World Cup. This wasn’t revenge but was sweet nonetheless.

Dave Callaghan: 169 vs New Zealand at Centurion (1994): The former South African batsman did not enjoy a successful international career, but this ton of his is rated among the good ones by Proteas batsmen, and is an oft recollected one. With big names like Hudson, Cronje and Cullinan around, Callaghan smashed a decent Kiwi attack, which featured Chris Pringle, Simon Doull and Chris Harris, to all parts of the ground. The rarity of the knock was that Callaghan batted right through the innings, remaining unbeaten on 169 at the end of 50 overs. His memorable knock was punctuated with 19 fours and four sixes. South Africa posted 314 and won easily, as New Zealand folded up for 233 despite Adam Parore’s ton. Callaghan played his part with the ball as well, scalping three wickets with his innocuous medium pacers.

Other 150 plus scores by South African batsmen:

Herschelle Gibbs: 153 vs Bangladesh at Potchefstroom (2002)