Hosts Sri Lanka crushed Zimbabwe by a massive margin of 82 runs in the opening game of the ICC World T20 2012 at Hambantota. Zimbabwe needing 183 to win from 20 overs were bundled out for a pathetic total of 100 in 17.3 overs. Mystery spinner Ajantha Mendis and leg spinner Jeevan Mendis were just too good for the Men in Red.

The run chase was off to a promising start for Zimbabwe before Ajantha Mendis was introduced in the 6th over to straightaway take two wickets in consecutive deliveries. First he got opener Sibanda bowled by a carrom ball and then with the same ball went past the defences of Skipper Brendan Taylor and had him stumped out smartly by Sangakkara. 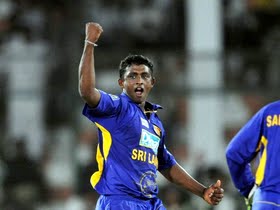 Ajantha Mendis added a third wicket when he cleaned up opener Hamilton Masakadza (20) with a googly in an attempted slog sweep which had Zimbabwe at 43 for 3 in the 8th over. Leg spinner Jeevan Mendis joined the party to take two quick wickets and Ajantha Mendis came back for a second spell to take three more wickets while hardly giving away anything.

The mystery spinner Ajantha Mendis finished up with dream figures of 4-2-8-6 while Jeevan Mendis mixed his googlies very well to come up with 4-0-24-3. Ajantha Mendis was the obvious choice for the Man of the Match.

Sangakkara, Jeevan Mendis lift SL to 182/4: Sri Lanka posted an imposing total of 182 for 4 in the opener of the ICC World T20 2012 against Zimbabwe. It wasn’t a spectacular show from the Lankan batsmen but they were helped immensely by some sloppy bowling and fielding performance from Zimbabwe who looked overawed by the situation.

The hosts got a solid start from its openers – debutant Dilshan Munaweera (17 from 19 balls) and Tillakaratne Dilshan (39 from 28 balls with 5 fours) which got them to 54 in 6.3 overs. Skipper Mahela Jayawardene fell cheaply leaving Sri Lanka rocked back slightly at 82 for 3 in the 12th over. Since then, it was all about Kumar Sangakkara along with the energetic Jeevan Mendis putting the hosts back on track.

Toss and Teams: Zimbabwe have won the toss and asked Sri Lanka to bat first in the Group C Match at Hambantota. The pitch for the opening game of the ICC World T20 2012 seems to have some nice sprinkling of grass. Conditions are expected to suit the seam bowlers and at the same time there could be even bounce and pace on offer for the batsmen.

Opener Dilshan Munaweera will be making his International debut for Sri Lanka tonight. And for Zimbabwe, surprisingly left-arm spinner Ray Price doesn’t find a place in the XI.