The first Test at the University Oval in Dunedin is nicely poised with all the four results possible on the final day. New Zealand after being set an improbable target of 401 are fighting back pretty well at 137 for 2 by the close of the fourth day’s play. The weather forecast is for rain tomorrow at Dunedin which will be welcome by New Zealand as it would fancy their chances of drawing the Test Match. 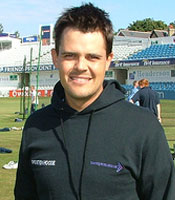 At Stumps on Day 2, New Zealand have got a solid partnership of 82 runs for the unbroken 3rd wicket between Brendon McCullum (58* from 91 balls with 5 fours and a six) and Skipper Ross Taylor (48* from 68 balls with 8 fours). The experienced duo rescued New Zealand from an otherwise shaky position of 55 for 2.

Earlier in the day, the South Africans resuming Day 4 at a solid 268 for 3 finished their second innings at 435 for 5 declared. Overnight centurion Jacques Kallis added only six runs before he got out early for 113 (from 263 balls with 16 fours). Jacques Rudolph, the other overnight batsmen did well to help himself to an unbeaten 105 (from 182 balls with 15 fours and a six).