Natarajan brought us back in the game: Washington Sundar

Although Australia ended Day 1 of the Gabba Test at a healthy 274 for 5, Indian spinner Washington Sundar feels that T Natarajan brought India back in the match by claiming two wickets in the final session of the day’s play. Both Sundar and Natarajan made their Test debut at Brisbane for the injury-hit Indian team. The left-arm seamer dismissed Mathew Wade and centurion Marnus Labuschagne as India kept fighting in the Test, despite Navdeep Saini also walking off injured during the course of the day’s play.

"I think Nattu bowled really well today. He brought us back in the game. Labuschagne and Wade added runs but he dismissed both of them and definitely feels good making debut alongside him. He is a champion bowler and hopes he does really well," Sundar said at the virtual press following the end of the opening day’s play

Sundar, himself, claimed the big wicket of Steve Smith as India fielded their most inexperienced bowling attack in decades. Speaking about his own debut, the slow bowler added, "It's a big opportunity to represent the country and playing Test cricket is an amazing thing. I was very excited to go there and bowl the first ball and after that, I just wanted to bowl a lot many balls and pick wickets.” 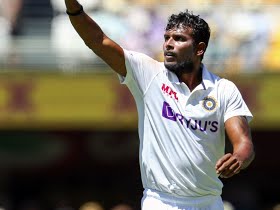 Admitting, he was nervous, Sundar went on to state, "Yes, there was some nervousness but more than anything it's an amazing opportunity to represent the country.”

Electing to bat after winning the toss, India got off to a brilliant start as Mohammed Siraj sent back David Warner for 1 and Shardul Thakur accounted for Marcus Harris on 5. Labuschagne and Smith they featured in a steadying partnership before Sundar had the latter caught at short midwicket for 36.

Labuschagne went on to complete a century before perishing to Natarajan for 108. Wade was looking good for a fifty but eventually fell five short of it. At stumps, skipper Tim Paine was unbeaten on 38 and Cameron Green not out on 28. The duo helped the hosts recover from 213 for 5, giving them the upper hand.