Bangladesh would be extremely pleased after drawn series

If Bangladesh were told at the start of the series that their two-Test match series at home against New Zealand would have ended in a draw, they would have been reasonably pleased. After all, the Kiwis are still a much stronger side as compared to the hosts.

If Bangladesh were told at the start of the series that their two-Test match series at home against New Zealand would have ended in a draw, they would have been reasonably pleased. After all, the Kiwis are still a much stronger side as compared to the hosts. And, with rain washing out the entire fifth day’s play at Mirpur on Friday, both teams shared the honours in the series. As mentioned earlier though Bangladesh would have been the happier of the two sides, as they matched New Zealand in all departments. 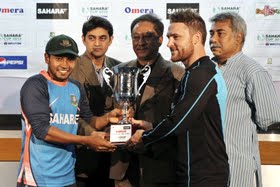 Mominul Haque was the standout performer for Bangladesh in the series, and was correctly adjudged the man of the series. He made a brilliant 181 in the first Test, and an unbeaten 126 in the second match. In both the knocks, he looked in complete control of the situation under diverse circumstances. Even in the other two innings that Haque played, he looked in fine form, and made decent contributions. In short, he did not have a single failure in the series, and the Bangladesh management would be bolstered by his consistency. The 22-year-old is definitely one for the future.

Most of the positives for Bangladesh were with the bat. Sohag Gazi got a spanking century in the first Test, apart from of course picking up a hat-trick in the same match, and six wickets in the innings. Tamim Iqbal did not have a great first Test, but came back strongly in the second, with two sparkling half-centuries. If anything, he would have been disappointed to have missed out on a hundred. After all, he got 95 in the first innings and 70 in the second. If anything, Bangladesh would have liked some of the other batsmen who got starts to carry on to bigger scores.

Although New Zealand would have slightly disappointed that they couldn’t win a Test, they had their own sets of plusses over the two games. Kane Williamson and BJ Watling notched up centuries in the first Test while opener Peter Fulton got two half-centuries. Williamson also got a half-century in the second Test while newcomer Corey Anderson came up with an impressive ton. New Zealand played only one innings in the second Test, in which Ross Taylor, Watling and even Ish Sodhi came up with half-centuries.

Of the two bowling units, New Zealand were slightly more impressive even though they could not breakthrough to lead their side to a victory. Neil Wagner made a serious impression in the second Test while Ish Sodhi also did well with his three-for. Bangladesh survived in spite of a poor first-innings batting performance because the hosts’ batsmen were defiant in their second innings. Doug Bracewell was among the wickets in the first Test although he wasn’t as consistent throughout. From Bangladesh’s side, apart from Gazi, spinners Abdur Razzak and Shakib Al Hasan made an impact. Analysing all aspects of the series, a draw was a fair result in the end.