How to bat on a spinning pitch? Ask Mahela Jayawardene

On a surface at the Premadasa, which was turning and bouncing from the very start, it needed something special from a great batsman to conquer the conditions and the bowling.

On a surface at the Premadasa, which was turning and bouncing from the very start, it needed something special from a great batsman to conquer the conditions and the bowling. And that something special came from the blade of Sri Lankan skipper Mahela Jayawardene. After deciding to bat first, it was very clear at the outset that this was not going to be a match for batsmen who love to swing the bat around. The struggles of Jayawardene’s normallyaggressive opening partner proved the point. Even as Jayawardene went about scoring freely, Tillakaratne Dilshan was unable to find the gaps and had to be content watching his captain from the non-striker’s end for most part during their alliance. 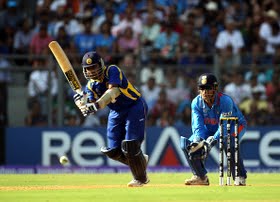 Jayawardene’s innings on the day, which eventually was responsible for taking Sri Lanka to the finals of the tournament, was a tutorial on how to bat in conditions where the ball is spinning and jumping. Instead of going for all-out slogs, Jayawardene employed the paddle sweep and reverse sweep against spinners to great impact. When not, he smartly brought out the nudges and glances to keep the scoreboard alive and ticking. The quality of Jayawardene’s knock can be judged considering the fact that even Saeed Ajmal failed to keep him in control. Although, Jayawardene eventually fell going for another paddle shot, he had done enough in hindsight to put Sri Lanka on the path to the finals.

To their credit, the Pakistan bowlers pulled back the game well following Jayawardene’s dismissal. Dishan could not go on to bat till the very end although he held up one end for most part. Also, the newcomers to the crease found it extremely difficult to deal with the spin-friendly conditions. As a result of the same, the Pakistan spinner combined to restrict Sri Lanka to what they would have considered an achievable total. Their move to bring in Sohail Tanvir for Abdul Razzaq had also worked, and, at the halfway stage, they should have been confident of chasing down the Lankan total.

The chase wasn’t going to be easy under the circumstances. However, Pakistan had the men to do the job. On the day though, they just weren’t good enough. For most part of this World T20, Pakistan have heavily relied on their number three bat Nasir Jamshed. Unfortunately for them, Jamshed had an off day, and the rest just couldn’t handle the pressure. Imran Nazir was unlucky as his defensive prod led to the ball going back on to the stumps. At the same time, Ajantha Mendis should also be credited for the dismissal, as it were his revolutions that made the ball travel backwards and destroy the furniture.

Hafeez tried his level best, holding one end up and also finding the boundaries at crucial moments. One over from Rangana Herath, who was brought in for the semi-finals, changed to complexion of the game completely. Hafeez would rue the mad dash he made down the wicket, and while Shahid Afridi’s wild swish wasn’t unexpected, his first-ball dismissal was heartbreaking for Pakistan. At the end of the day, a methodic approach from Lanka saw them through while Pakistan paid the price for lack of planning.