The day is finally here. Arch-rivals India and Pakistan will face each other in match number 22 of World Cup 2019 at Old Trafford in Manchester.

The day is finally here. Arch-rivals India and Pakistan will face each other in match number 22 of World Cup 2019 at Old Trafford in Manchester. Although unbeaten, India go into the clash with the match against New Zealand being rained out while Pakistan lost to Australia despite showing glimpses of brilliance.

India has an impeccable record against Pakistan in the World Cup with six wins in as many attempted starting from 1992. However, it needs to be remembered that Pakistan crushed India in the most recent meeting between the two teams, and that was the Champions Trophy final in 2017. The heroes of that game Mohammad Amir, Fakhar Zaman and Hasan Ali are all likely to feature in the playing eleven on Sunday.

While the game wouldn't be seen as a revenge match, India would be raring to maintain their unbeaten run. Like in the match two years ago, the contest at Manchester is also expected to be one between Pakistan's bowlers and India's batsmen. The tussle between Rohit Sharma and Amir as well as Virat Kohli and Amir could be defining. It is no secret that Rohit has struggled against Amir over the years and a back-in-rhythm Amir could be extremely dangerous for India. 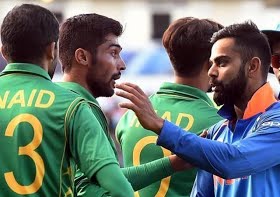 After a long time, the Indian top order will have an unsettled look as Shikhar Dhawan has been ruled out for a major chunk of the World Cup with a thumb fracture. At the same time, it is an opportunity for Lokesh Rahul to make a mark at the top of the order. And, what better than an Indo-Pak game to stand up and deliver? It also remains to be seen if Rishabh Pant is drafted into the big game or if India goes with Vijay Shankar or Dinesh Karthik.

There aren't any changes expected in the bowling department. Jasprit Bumrah and Bhuvneshwar Kumar have complemented each other perfectly although one must feel for Mohammed Shami, who hasn't done much wrong to be left out. Yuzvendra Chahal has continued to shine at the big stage even as Kuldeep Yadav is yet to find back his mojo.

Like always, it has been an up and down journey for Pakistan. The crumble against West Indies was followed by a superlative display against favorites England but they couldn't come up with their best against Australia. There were phases when Pakistan dominated, first when Amir's five-for kept Australia to a chaseable total and then when they were building partnerships right throughout the innings.

Pakistan lost the match because they couldn't constantly maintain the pressure on Australia in the chase. Almost every other player got in, played attractive strokes and then got out. The batsmen will need to learn their lessons when they face another tough opponent in India. The lack of runs from Shoaib Malik will be a big concern for Pakistan. But, can they take the risk of replacing him for such a big match?

No match report this World Cup is complete without a mention of the weather. And, unfortunately, there are chances of rain this Sunday as well. One can only hope that the weather doesn't disrupt the big day fans from both countries have been waiting for.