Pakistan has won the match. Another thriller and a nail biter. First 'home' series victory for Pakistan after six years.

Pakistan and Zimbabwe played their 2nd T20 Match of Cricket Series 2015 at Qaddafi Stadium Lahore on 24 May 2015.

Zimbabwe captain Elton Chigumbura won his second successive toss and chose to bat against Pakistan in the second Twenty20 International. 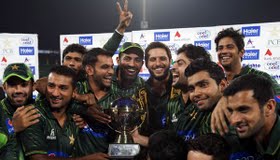 Pakistan has won the match. Another thriller and a nail biter. Team Pakistan never fails to deliver suspense. Kudos Bilawal Bhatti for his onslaught at the death of the innings to secure the result for the team.

First 'home' series victory for Pakistan after six years. They have been left waiting for a long, long time.

Mukhtar Ahmed has won the Man of Match award and Man of Series award as well! Brilliant knocks

Shahid Afridi: We enjoyed playing against Zimbabwe. The crowd has been great. Thank you so much, crowd. As a captain, I had confidence in Bilawal Bhatti.