India must try out the other bowlers in the squad

In a rather shocking development, India retained both Ishant Sharma and R. Vinay Kumar in spite of their exceedingly poor show in the series so far. One really wonders the logic behind the decision.

In a rather shocking development, India retained both Ishant Sharma and R. Vinay Kumar in spite of their exceedingly poor show in the series so far. One really wonders the logic behind the decision. At least in Ishant’s case, it is the fact that he has been struggling only in this series. He has constantly floundered over the last two seasons, and the only reason he has managed to hold on to his position is because of his experience. Sadly, that experience has counted for naught, at least in this series. 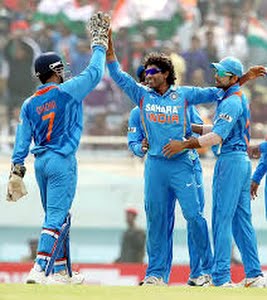 Even if Ishant has been retained for the rest of the four games, it would only be fair for the Indian think-tank to try out the other bowlers in the squad, who have been on the bench for the first three games. All of them had a successful series in Zimbabwe, and while that is not a lot to derive confidence from, they still must be in some kind of positive form as compared to Ishant and Vinay Kumar. Also, it is difficult to imagine that the likes of Jaydev Unadkat and Mohammad Shami can do much worse than how Ishant and Kumar have performed.

Considering the manner in which Ishant and Kumar have been thrashed by the bowlers, it wouldn’t be a bad idea to give them a break. They can stay away from the spotlight for a while, and develop their skills in certain aspects where they lack. Death overs bowling is definitely the area both need to improve by leaps and bounds. They are not bad early in the innings, but at the same time they don’t strike the early breakthroughs often. Still, Ishant conceded only 33 runs in his first 7 overs in the last match, which wasn’t bad. It was just the one over that mattered though.

Like in the pace bowling department, a change in the spin attack wouldn’t be a bad idea as well. Ravichandran Ashwin has performed decently to establish himself in the side as the lead spinner. But, in recent times he has looked jaded and, in this current series, he has definitely looked far from effective. With so much non- stop cricket being played these days, it is understandable why players lose form so quickly. Ashwin definitely needs a break to get himself back on track once again.

In Amit Mishra, India have a suitable replacement. Although too much cannot be read into his excellent performances against a weak side like Zimbabwe, the fact that he did so well also cannot be ignored. Mishra deserves his chance to prove his mettle against bigger sides, and his performance against the Aussies would give us a fair idea of his progress. Too much chopping and changing may not be good, but the current status of India’s bowling cries for the same. If things do not work out, we might as well see the likes of Zaheer Khan and Harbhajan Singh coming back in the scheme of things.