South Zone on top of Central despite Kaif’s century

Central Zone finished their opening day’s play of their Duleep Trophy Semi-Final against South Zone at 292 for 8 in 90 overs. The match played at the MA Chidambaram Stadium in Chennai saw Central Zone pegged back by regular strikes from the homeside medium pacers. Stuart Binny took three wickets while Abhminanyu Mithun took two wickets for South Zone. 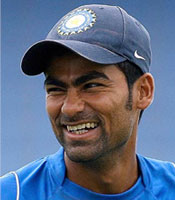 For the Central Zone, India discard Mohammad Kaif scored a century, 108 from 207 balls with 12 fours. Skipper Piyush Chawla came up with a counter-attack knock of 52 from 54 balls with 5 fours and 3 sixes. Central Zone otherwise would have been in much more trouble considering that they were 90 for 4 at one stage having won the toss and elected to bat first.