The fortress was breached, and how !

As Rishabh Pant thrashed the low full toss against Hazlewood down the ground, possibly one of greatest series ever played culminated with India emerging victorious. With this win, not only did India break the Aussie’s “invincible at Gabba” tag that they held for 32 years, they also registered their third highest run chase ever, and they also got rid of their Adelaide 2014 demons. The fact that they did it without Kohli, Ishant, Shami, Bumrah, Ashwin and Jadeja makes it even more special.

Beginning the day at 4-0, Rohit Sharma and Shubhman Gill had an improbable task of making 324 runs to win the match, as a draw would have secured them the Border-Gavaskar trophy anyway. Especially when Rohit got out early in the day, and Pujara scored at a strike rate of nearly 10 for his first 100 balls, a draw seemed to be the likely result. But young Shubhman Gill just went about his usual strokemaking approach irrespective of the situation. He took on the barrage of bouncers dished out to him by the troika of Hazlewood, Starc and Cummins and came out aces. It was Lyon who got his wicket against the run of play and one would have thought there goes India’s slight hopes of a victory. 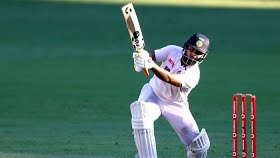 But much to everyone’s surprise, those hopes were amplified when an attacking Rahane came out to bat and Pant was promoted ahead of Mayank Agarwal. Witnessing all this was Pujara, who took several blows to his body but hung in there. Pant was in no mood to throw his wicket away, and batted responsibly, except for a couple of occasions. The more he occupied the crease, the more India’s chances increased and even though Pujara and Mayank Agarwal got out in quick succession, he stayed till the end. Sundar played a brilliant little cameo but got out as it was Pant who was the chosen one to finish this game off, and deservedly so.

This series win is a perfect reply to all those who undermined India’s 2018-19 win citing the absence of Smith and Warner, as this time it was perhaps India’s third string side against easily the best bowling attack in the world and that too in their own den. What this win also does is it speaks volumes of India’s domestic cricket structure and the exposure that was given to the “India A” side. A special shoutout must go to their mentor Rahul Dravid for making sure that whenever a Pant or a Gill or a Thakur or a Siraj made their debut, they already had played in similar conditions against top class oppositions and had the right mindset on how to tackle the situation. All of the preparation that the bench strength of India had done proved to be fruitful in their toughest exam yet.

It is matches/series like these that makes you realise the importance of test cricket and at the same time appreciate how T20 cricket has helped test cricket evolve. The fact that we got to witness such a high profile series fought till the very end (quite literally), is a tribute to test cricket and the poetic finish it gave all of us today.