The Gabba Test as expected petered out into a draw though South Africa had their anxious moments in saving the game.

The Gabba Test as expected petered out into a draw though South Africa had their anxious moments in saving the game. Michael Clarke gave it up with 11 overs left, with South Africa at a lead of only 51 runs and four wickets in hand. AB de Villiers helped the Proteas to the draw by batting out for 114 balls to score a cautious 29*.

The Aussies were in the business during the final session when Nathan Lyon forced Jacques Kallis (49 from 91 balls with 5 fours and a six) to edge his straighter one to slip leaving SA at 129 for 4 in the 49th over. Just when the last hour was approaching, SA lost another wicket in Jacques Rudolph, who completely went into a shell and ended up even defending a slow full toss. Rudolph (11 from 36 balls) missed a quicker drifter from Lyon to be lbw which prompted Michael Clarke to go for the kill in the last hour. The Aussies abandoned it midway though with SA hanging in there at 166 for 5 in 68 overs. 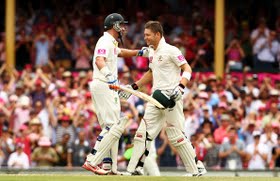 Michael Clarke for his marathon knock got the Man of the Match award. The second Test of the 3-match Series begins on the 22nd at the Adelaide Oval.

Tea Report: The Gabba Test still hangs in the balance between a draw and a possible Australian victory. The visitors are trailing behind by just the one run but are under a bit of pressure at 114 for 3 in 38 overs against a spirited Australian pace attack.

The afternoon was getting heated up as James Pattinson was getting over Graeme Smith with his verbal onslaught. The pressure finally got onto Smith (23 from 67 balls) who sliced a drive off the young fast bowler to get caught by the diving Quiney at gully with SA at 55 for 2 in the 21st over.

Australia would need a miracle of sorts to win the match in the final session which has a maximum of 41 overs to be bowled in two and a half hours.

Lunch Report: South Africa are in a battle to save the Gabba Test and they will have to bat out the afternoon session pretty well to diminish any outside chances of an Australian win. The hosts declared their first innings with a lead of 115 runs and then have SA under pressure by taking the early wicket of Alviro Petersen (5, caught behind driving loosely at a full length outswinger from Pattinson).

South Africa would have lost their second wicket as well when Hashim Amla edged a Pattinson yorker onto the stumps but was saved with the bowler overstepping according to the TV Umpire. Amla is on 7* while Skipper Graeme Smith has looked good for his 17* (from 47 balls) as SA closed the morning session at 31 for 1 in 13 overs. The visitors need to score 84 more runs to make Australia bat again.

Earlier in the session, Michael Hussey completed his century and got out driving Morne Morkel to covers after a breezy 100 from 129 balls (with 13 fours). His overnight partner Michael Clarke remained unconquered on a marathon 259* (from 398 balls with 26 fours) in the company of Matthew Wade (19*). The hosts declared during the drinks break at 565 for 5 in 138 overs.

Build Up to Day 5: The fifth and final day at the Gabba in the opening Test between Australia and South Africa has started under bright sunshine. The Aussies go into Day 5 with a first innings lead of 37 runs with six wickets in hand. They are the only team that has an outside chance of winning this Test match and for that the hosts will have to get their lead quickly to 200 and then hope to bundle out the Proteas cheaply. Otherwise the match will be heading towards a draw on what has been a flat batting surface at the Gabba.