Shocking Revelation! When Virat Kohli was scared of Lasith Malinga

Indian captain Virat Kohli is possibly the most feared batsman in the world today. But, Kohli has revealed that he himself was scared

Indian captain Virat Kohli is possibly the most feared batsman in the world today. But, Kohli has revealed that he himself was scared when he went out to bat against Lasith Malinga in the 2011 World Cup final.

Malinga had dismissed Sachin Tendulkar and Virender Sehwag early in the chase. Kohli came in at number four and made a crucial 35 for the team, featuring in a steadying partnership with Gautam Gambhir. 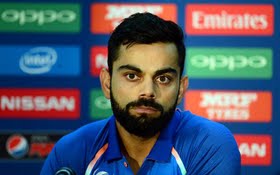 However, making a stunning revelation, Kohli said, “Mujhe darr lag raha tha Malinga yorker nahi daale (I was afraid of facing Lasith Malinga’s yorker). Already I was nervous! But after 2-3 balls, I settled down.”

The Indian skipper said this while shooting for a special TV show with Aamir Khan. As for the match, everybody knows that India went on to lift the World Cup in 2011.