In a thrilling encounter at the Nondescripts Cricket Club Ground in Colombo, England defeated arch rivals Australia by a narrow margin of 9 runs.

In a thrilling encounter at the Nondescripts Cricket Club Ground in Colombo, England defeated arch rivals Australia by a narrow margin of 9 runs.

Asked to bat first after losing the toss, England riding on two good knocks from opener Alex Hales (52 from 38 balls with 7 fours) and Eoin Morgan (30 from 16 balls with 4 fours and a six) posted a competitive total of 172 for 6. None of the Aussie bowlers had a spectacular day. 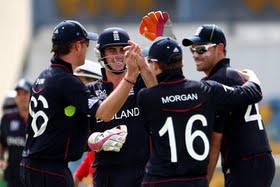 Australia in their run chase were on track with Shane Watson’s 37 (from 26 balls with a four and 3 sixes). Michael Hussey went onto score 71 from 51 balls with 3 fours and 5 sixes but got out without seeing the Aussies through. England clawed their way back to hold onto a 9-run win eventually.