Kochi ODI: West Indies proved how dangerous they can be as a one-day side

As mentioned earlier, India went into the five-match one-day series against West Indies as favourites. In the same vein, it was also mentioned that West Indies cannot be taken lightly.

As mentioned earlier, India went into the five-match one-day series against West Indies as favourites. In the same vein, it was also mentioned that West Indies cannot be taken lightly. The Indians got a fair idea of the embarrassment they can be subjected to in case they did not get their act right. At Kochi, they were clearly not at their best, and West Indies made them pay heavily. It actually seemed that India got overconfident of their skills going into the clash after the triumph. If that was indeed the case, they have been given a harsh lesson by the West Indians. The hosts will need to get their act right soon.

Both in the batting and bowling department, the Indians were below par. Surprisingly, their pacers as well as the spinners struggled on a sporting pitch that had something in it for all. It is quite possible that the Indians were still in T20 mode. Remember, Chennai Super Kings recently won the CLT20, and a number of players from that team are actually a part of the current Indian team. They will really need to change their mindset if they want to recover from the shambolic start to the series. We are only onegame into the series, but the manner of defeat could have a defining impact on the rest of the games. 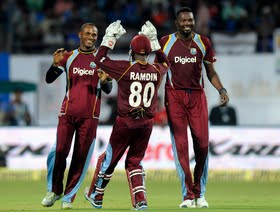 India's bowling in the match was highly terrible. Except for Bhuvneshwar Kumar, none of them, either pacers or spinners, could make any sort of impact. Mohit Sharma was given a tough lesson in how not to bowl in a one-day game. He was carted all over the park. Something similar happened with the more experienced Mohammad Shami as well. Although he finished with four wickets, most of them came towards the end of the innings, when West Indies had already played themselves into a comfortable position. India definitely missed the services of Ravichandran Ashwin as both Amit Mishra and Ravindra Jadeja were thrashed for plenty.

If you look at the Indian batting, it was again highly disappointing. Although West Indies posted a massive total on board, India should have been confident of chasing down the total, since they have done the same successfully in the recent past, at least at home. However, the poor bowling performance seemed to have impacted their confidence as they just could not handle the pressure of the rising run rate. Credit must also be given to West Indies' bowlers who never allowed the Indians to settle in, and eventually that clinched the game for them.

India did get off to a good start, but apart from opener Shikhar Dhawan no one could convert the starts into bigger scores. Ajinkya Rahane's untimely run-out set India back early, and the middle order completely crumbled under pressure. The experienced batting line-up needed a couple of players to stand up and rise to the challenge, but everyone from Virat Kohli to Suresh Raina failed on the day, leading to a massive loss. In the end, it wouldn't be wrong to say that West Indies completely outplayed India in the match.