IPL 2015 Match 20 RCB vs CSK Preview, Live Scores: If you look at batting line ups in the IPL, Chennai Super Kings and Royal Challengers Bangalore are the two sides with the most destructive players.

If you look at batting line ups in the IPL, Chennai Super Kings and Royal Challengers Bangalore are the two sides with the most destructive players. If Chennai have Brendon McCullum, Dwayne Smith, Dwayne Bravo and MS Dhoni, Bangalore have Chris Gayle, Virat Kohli and AB de Villiers in their midst. If you look at the recent performances of the two sides, Chennai go into the match having lost to Rajasthan Royals while Bangalore also tasted defeat at the hands of Mumbai Indians. But, form will count for little if batsmen from either side explode. 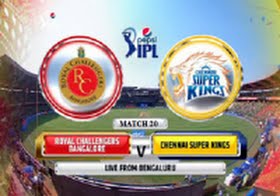 Looking at Chennai first, their success in this year's edition so far has been largely built around the performance of their dynamic opening pair, Brendon McCullum and Dwayne Smith. While McCullum has played one sizzling knock, and hasn't been able to do much in the others, Smith has been in smashing form, playing quick-fire knocks at the top of the order. Chennai would be keen for Smith to continue his great form.

One factor that has let down Chennai is the fact that their middle and lower order batting hasn't fired as desired. Suresh Raina has only played the one good knock while Dhoni had a massive struggle in the last game against Rajasthan. Faf du Plessis too needs to get back among the runs. Thankfully for Chennai, Dwayne Bravo got a good score in his last outing. Chennai's bowling has been more than efficient with veteran Ashish Nehra leading the way, and Ravichandran Ashwin and Mohit Sharma providing good support.

Form really doesn't count for much as far as Bangalore, and more specifically, Chris Gayle is concerned. He looked completely uninterested in the match against Mumbai Indians, literally sleepwalking through his innings. Gayle would be keen to make amends for the same. If he fires, he can singlehandedly win the game from any situation, as known to all. The other two batsmen from whom a lot would be expected are Virat Kohli and AB de Villiers for obvious reasons.

Bangalore are slightly thin in the bowling, but they would be buoyed by the return of Mitchell Starc, who has recovered from injury, and would be available for Wednesday's clash. Yuzvendra Chahal has been the most impressive of all Bangalore bowlers, and Kohli would be looking for another impressive performance from him. Varun Aaron, meanwhile, has disappointed, and might make way for Ashok Dinda. The match, however, might well be decided on batting exploits.